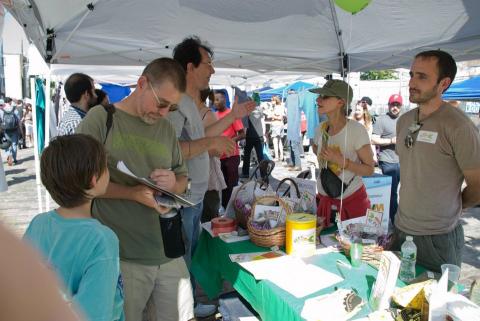 “Most co-ops that are coming into being really see as their mission bringing fresh, sustainable produce to the communities,” said Patricia Smith, senior policy analyst at TRF.

The KCFC and SPFC are part of a growing network of Philadelphia-area food cooperatives, including well-established co-ops like Weavers Way Co-op and Mariposa Food Co-op and newer additions in Ambler, Bethlehem, and Mannayunk.

“We know we have to do this anyway,” said Alison Fritz, SPFC board president. “What this grant allows us to do is work with professionals… We’ve sort of dreamed about working with these types of consultants.”

The two co-ops share a goal of bringing healthy, organic, local food into their neighborhoods.

“South Philadelphia isn’t by anyone’s definition or experience a food desert, but there is a serious lack of quality, organic food,” Fritz said.

Both co-ops are equally committed to supporting their respective neighborhoods as well.

“It’s as much about community building as it is about healthy foods,” said Peter Frank, KCFC board vice president.

“One of the benefits is we all get to know each other as neighbors and friends and not just strangers shopping in a grocery store,” he said.

Having other successful co-ops in the greater Philadelphia area has helped both KCFC and SPFC get on their feet.

Both Fritz and Frank noted that Weaver’s Way has provided tremendous support and that Mariposa, which opened a new store on Baltimore Ave earlier this year, has served as an example of how growth and expansion can take shape.

“We’ve sort of watched them with a smile on our face and a twinkle in our eye,” Fritz said of Mariposa and their recent expansion.

Smith said TRF, which provided financial support to Mariposa during the expansion, has seen co-ops on the rise nationally.

“What it does demonstrate is not only the growth of co-ops but a lot of organizations… looking at the relationship between healthy, good food and economic activity,” she said.

It is an exciting time for SPFC, KCFC and the co-operative movement in general, Fritz said.

“I think it’s a great time for people to become a members of the co-op [movement],” she said. “We’re passed the point of, is this movement going to last or is it going to fade out? I think we’ve proved it’s going to last.”