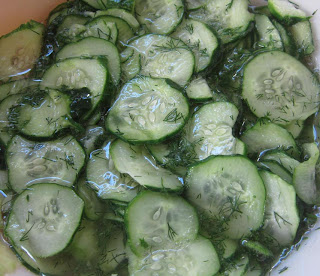 My friend MSNDG's grandmother makes this cucumber salad. I should be clear, she makes a cucumber salad, or even the cucumber salad, but not really this cucumber salad, and it's truly spectacular. It's sweet and tangy and so cool and crisp. I was thrilled to take home the leftovers from one of their family events a few months back. Also, we had a variant of this over a year ago as part of the falafel dinner. I'm very good at asking your mother, your grandmother, whoever, for a recipe, but I'm not good at pulling out a notepad and writing it down. We covered this in the episode on brisket. But I asked her, I think twice, and she kindly told me what she does, but I'm under the impression that either she cooks like me, and doesn't measure everything, or that she intentionally gave me vague directions so I couldn't follow her recipe exactly. Either way, it worked like that, because I have no idea exactly how she makes it and this was close, and fantastic, and I'll make it again and again, but it's not MSNDG's grandmother's recipe. Close. When I asked MSNDG for a refresher, just before making this, she gave me about as much information as I had remembered... vinegar, sugar, salt, white pepper, and cucumbers. Ratios, procedures, no.So I got to Googling. I figured if I didn't make MSNDG's grandmother's cucumber salad, I could make someone else's grandmother's version. This week in my farmshare email there was a Simply Recipes version, which looks cool and refreshing and wonderful but doesn't have the sugar I know this one does. Smitten Kitchen uses this one from Gourmet that includes garlic and less sugar than I thought was right for recreating this particular salad. Emeril uses two kinds of vinegar, and there's quite a few others floating around out there, like this one using olive oil, this one with mayo, and this one with mint, tomatoes, and onions. So as with most things, I winged it, with all of the varieties I'd read about plus my vague recollection of the actual recipe. As rarely happens, it worked very well. I started with these tiny cucumbers that my CSA calls pickles. 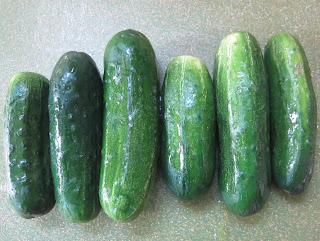 I put on my safety glove and busted out the mandoline. One thing certain in the original recipe is that the thinner the slices are, the better the salad is. I chose to go skin-on, because that's my approach to most things, but I know the original is peeled and several internet variations are striped, half peeled. 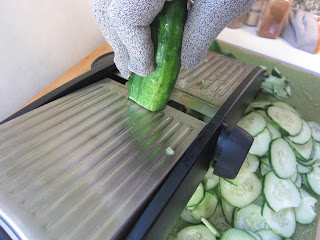 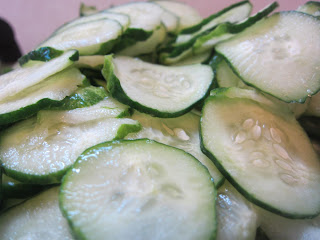 So in the end I had about five cups of slices. 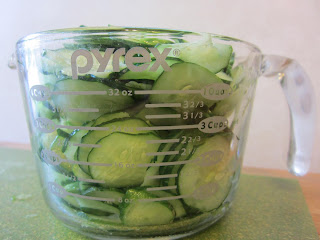 Step two is the marinade. Regular white vinegar, which in our house isn't so much food as it is all-purpose cleaner and ant repellant. It's ok, it's food. 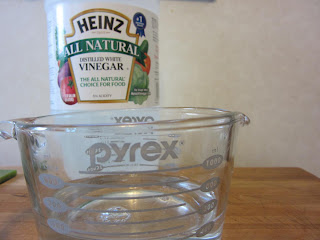 Add to that a half cup of white sugar. 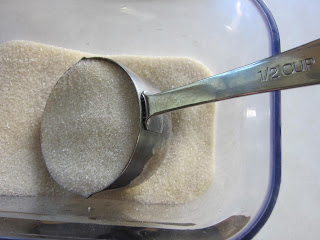 A teaspoon of kosher salt. 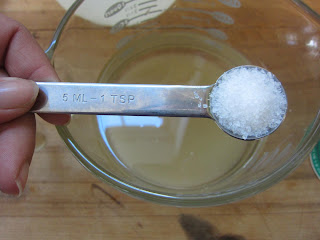 About a half teaspoon of white pepper. 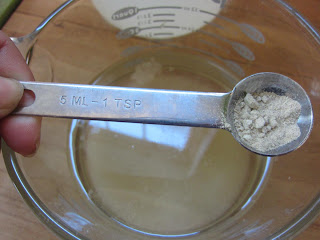 I stirred the mixture together well until the sugar and salt dissolved and then poured it over the cucumbers. It just about covered them, and if it hadn't I would just have added more vinegar. 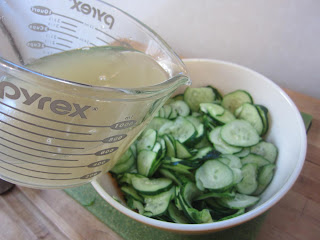 Next I added dill. 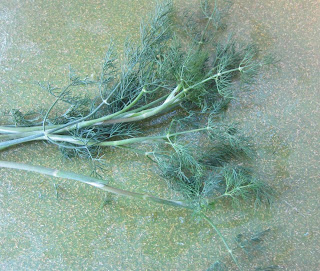 I was unsure about using dill, since MSNDG didn't list it among the ingredients she recalled, but I had this fresh dill and thought it'd be a waste to use cucumbers without it. When I served it this weekend I mentioned the dill and she agreed that it belonged in the salad. So, yay, dill. 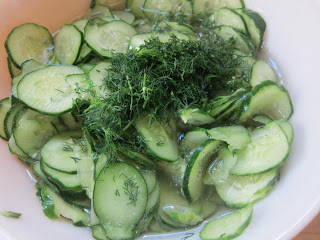 That got a few good tosses and an overnight stint in the fridge. 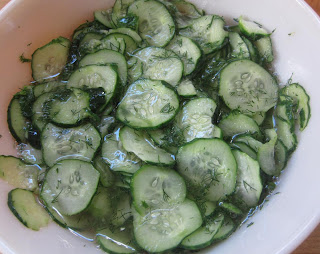 The next day is was cool and bright and tangy and awesome. Not quite the original but something we'll make as long as cucumbers are around this summer. Five cups of cucumbers made enough salad for four of us at dinner (alongside a green salad and some grilled pizzas) and two additional lunch portions, but we're all big cucumber salad fans so we may have overindulged. This recipe is cross-posted at Saturday’s Mouse, where I’m working on making food out of food. Cucumber Salad Ingredients Instructions Slice cucumbers as thin as possible. I used a mandoline. Dissolve sugar and salt in water, mix in white pepper. Pour over cucumbers. Toss with dill and store in refrigerator at least an hour, better overnight. Serve cold. Details
Recipes
Tweet