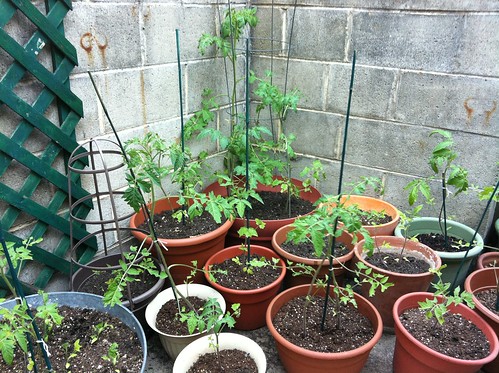 [/caption] Welcome back!  This will be short because I don't have too much to say (finally!).  Things are moving along and I'm happy to say that thanks to all the sunny days my waterlogged plants have finally dried out and I'm trying to stick to the schedule of watering them lightly every day. [caption id="" align="alignnone" width="500" caption="More garden. Still May 11th"] 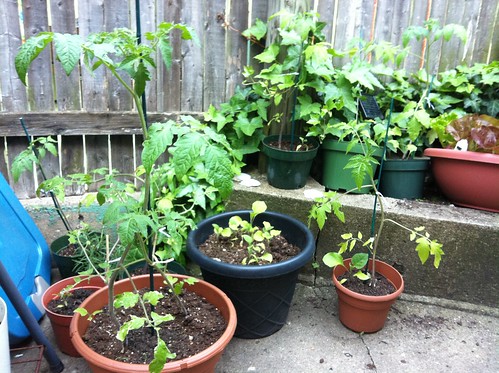 [/caption] I'm being totally serious here when I say that watering every day will be the hardest part.  Mostly because of my job which keeps me away from the house from 8-6 Monday through Friday and my tendency to not go directly home after work.  I'm on the lookout for some sort of self-watering system so I don't have to completely change my lifestyle (and kill my social life) so if anyone has any ideas, please let me know!  Sadly I don't have a hose (or even an outdoor spigot) so I'm looking for ideas with some sort of reservoir for the pots.  But for the foreseeable future I'll by relying on my two friends here: [caption id="" align="alignnone" width="500" caption="Watering can friends"] 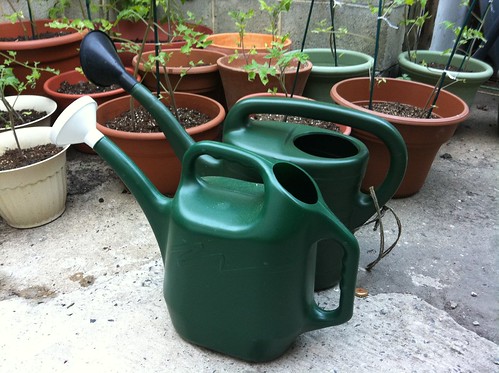 [/caption] And hey!  Some of the mint was used for juleps on Saturday [caption id="" align="alignnone" width="374" caption="Pretty and tasty"] 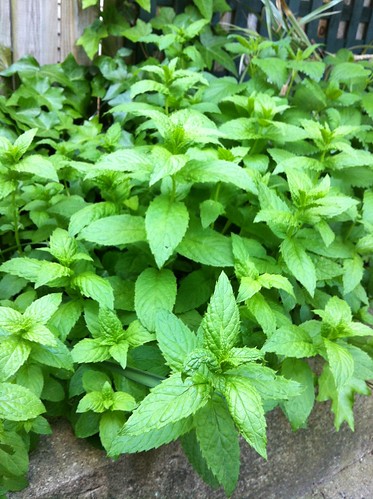 [/caption] But there's still a lot of it.  I have a feeling I'll be cutting this back all summer. Because I can never leave well enough alone, I have been noticing some strange things going on with the lower leaves of some of the plants, like this: 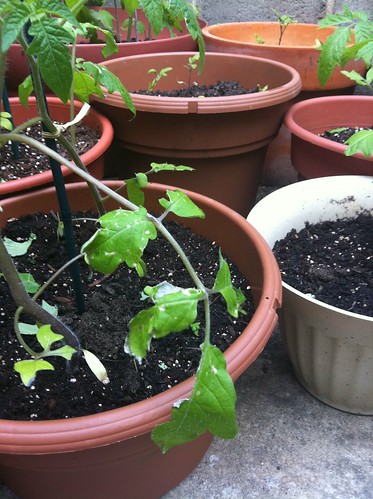 I'm hoping this is from transplanting and the leaves getting stuck to each other rather than little insects or slugs, but I'm going to keep an eye on it.  Also I've noticed that some of the little eggplants have what look like little bites in the leaves: 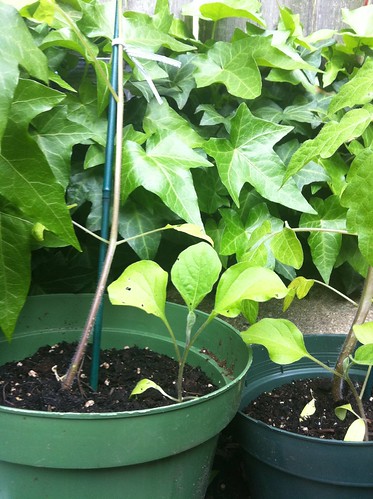 But again, I'm going to watch them and see where that goes.  I'm obviously not going to use any pesticides but I know that there are some gentler solutions like diluted soap and water that can help if things really get out of control.  For now the eggplants look pretty good and lots are getting new leaves: [caption id="" align="alignnone" width="374" caption="Someone figured out how to use the zoom on her iPhone!"] 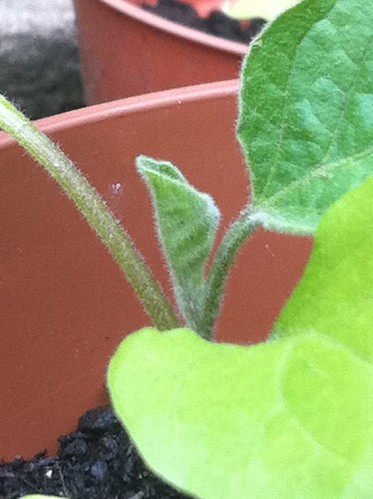 [/caption] This one, however, is worrying me: 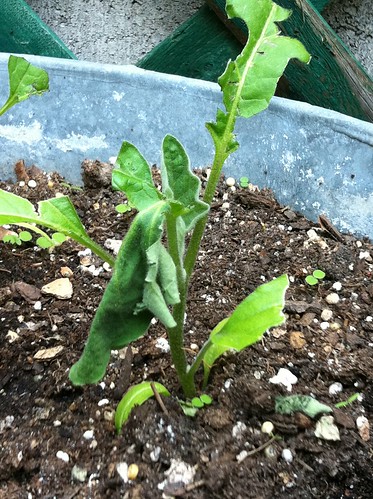 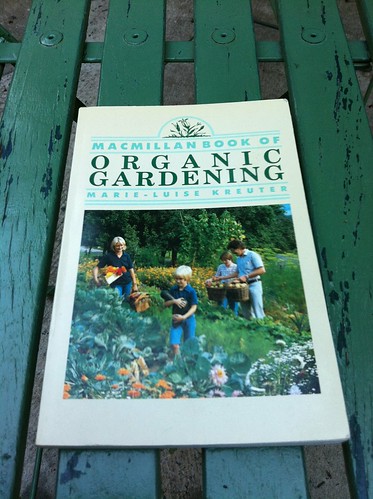 [/caption] And it's pretty informative!  It's definitely geared more toward those who have an actual yard and garden as opposed to containers, but it has lots of tips on composting, pest control using natural methods, and just general gardening knowledge.  ALSO they totally endorse using your hands instead of a spade to work the dirt (the chapter is called "Spadework?  No Thanks!") since spades disrupt the natural layout of the soil and plants already there.  So hey, getting your hands dirty is fun and helpful! One more random thing:  as I was walking through the Gallery on Sunday I noticed a Pennsylvania Horticultural Society display and stopped to look.  There was no actual person there because the Gallery is eerily empty on Sundays (what's with that?  I love the Gallery) but the display was all last years winners of the City Garden Contest.  Here's the website and pretty much anyone can enter as long as they have a garden!  I'm actually thinking of entering just for fun because sadly there's no cash money prize.  But if anyone's interested the deadline to enter is June 10th and then judging is during July and August.  You can also volunteer to be a judge if you want.  I think it's cool that they have a container garden category, as well as garden block and urban farm categories.  And there's also a children's garden category for all you young gardeners.  Anyway, the rules are basically that the garden has to be within the city limits and it can be an individual or community garden.  I highly recommend checking out the display at the Gallery (it's right inside after you go down the stairs at 9th and Market) if you're interested - I can't seem to find any pictures of last year's winners online but there was one grandfatherly-type man who grew insanely large squash in his little backyard.  I also think it's cool to see what people can do with just a little space. [caption id="" align="alignnone" width="374" caption="Tiny tiny feverfew"] 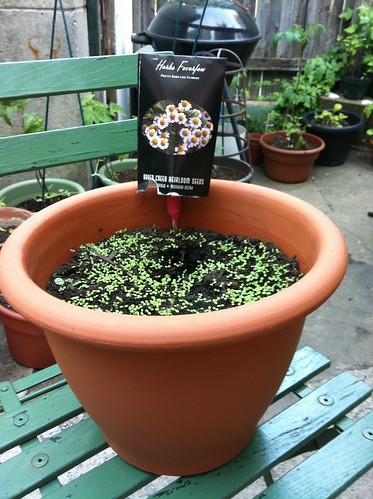 [/caption] On the indoor front, my feverfew and basil have sprouted and are ADORABLE as little baby plants always are.  I especially like the basil (shh don't tell feverfew!) because they already smell like little mini basils. [caption id="" align="alignnone" width="374" caption="Mini basil"] 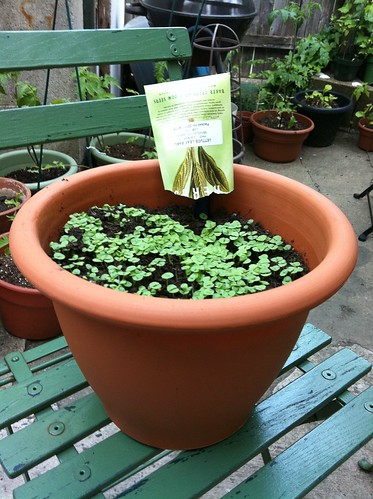 [/caption] Since they're still babies I've been misting them and I'm just waiting until they're big enough to put outside.  I've still got more things to start inside so hopefully this weekend is the time for that. That's it!  I'll be back next Thursday with another update. Sarah DeGiorgis has lived in Philly for five years and is finally starting to feel like a true Philadelphian, though she still detests cheesesteaks.  She enjoys reading, watching bad tv, eating and cooking good food and digging in the dirt. Catch up with her continuing efforts to grow food in South Philly by clicking here.
Sarah's Garden Gardening and Farming
Tweet