It may be a little early but my tomatoes were getting too big for their little pots so it was time to give them a little more space: [caption id="" align="alignnone" width="500" caption="copious Copias! believe it or not I haven't been sitting on that joke for months and months..."] 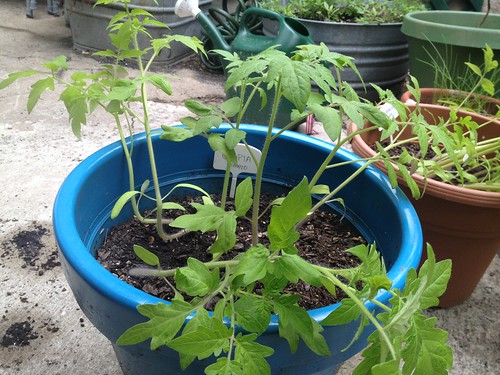 [/caption] This year I tried to make sure I got most of the main stem up to the first real leaves underground when I transplanted so that each plant has a chance to grow more roots (better for water retention which is a major problem in the summer.)  You just pinch off the two little baby leaves, which are the first to sprout but don't look like real tomato leaves and are usually much lower on the stem than the rest of the leaves: [caption id="" align="alignnone" width="500" caption="you can see that each stem has two little baby leaves much farther down the stem than the rest of the leaves"] 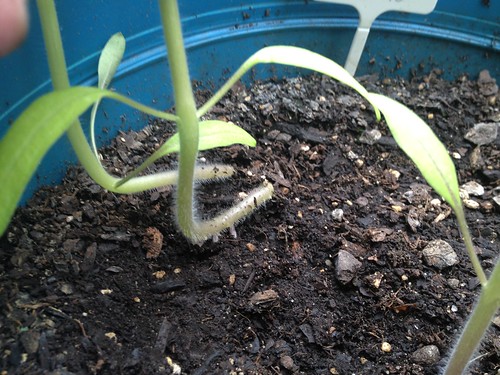 [/caption] If we wanna get real scientific here, those leaves are also called cotyledon leaves [end science.]  I pinch them off and then attempt to get the plant out of the dirt with minimum root damage: [caption id="" align="alignnone" width="375" caption="stem minus cotyledon leaves, plus roots"] 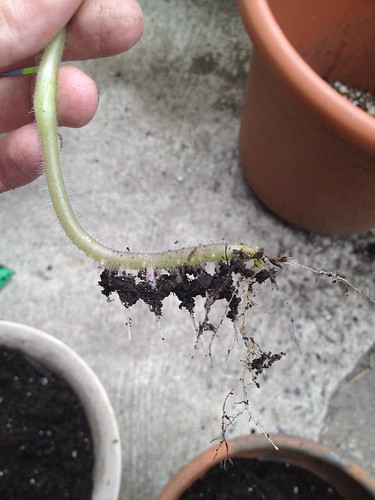 [/caption] Then (or before, if you're smart) you get your new pot and prepare it for planting.  Drainage is key:  trust me, tomatoes don't grow in standing water (and neither does much of anything unless you're growing water plants or moss.)  Most pots already have drainage holes in the bottom but if yours don't you'll need to make some.  Last year I made some just using some old scissors and lots of upper body strength but it's far easier to use an electric drill and less upper body strength.  Whichever way you choose, you're going to want holes that are big enough so that they won't get clogged with clumps of dirt and I always err on the side of more holes because you can always add water but getting rid of excess water is a bit harder. [caption id="" align="alignnone" width="374" caption="last summer I made drainage holes with scissors; most people own real person things like electric drills that make this task about 100x easier"] 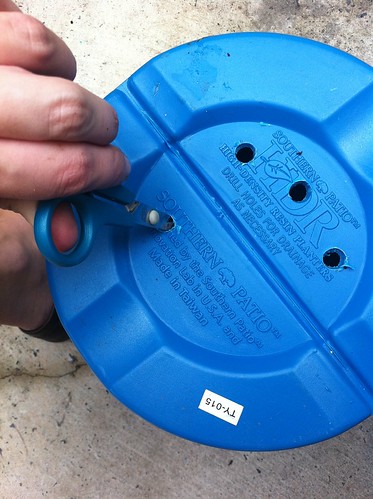 [/caption] Regardless of how you make the holes, you then need to make sure that all the soil doesn't just fall out of the drainage holes.  You need to water to drain but you don't want all the nutrient-rich soil to drain also.  You can use various things to keep your soil inside the pot; I like a layer of stones or old broken pots: [caption id="" align="alignnone" width="500" caption="layer your drainage material - stones, broken pots, pieces of your patio that keep chipping off - in the bottom of the pots before you add the soil"] 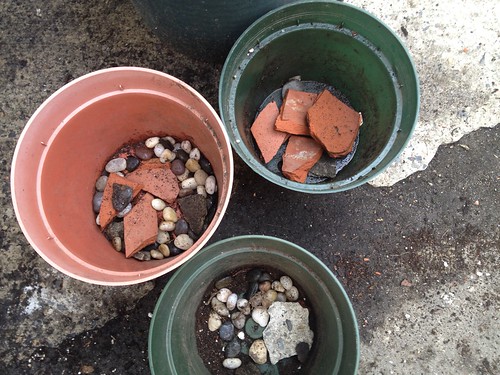 [/caption] The only thing to watch with stones is that they don't get stuck inside a drainage hole - if you're worried about that, larger pieces of cement or broken pots work especially well. All that's left is to plant!  So cover your drainage material with soil and whatever else you like (I add compost) and soon you'll have a little corner garden like this: [caption id="" align="alignnone" width="500" caption="garden!"] 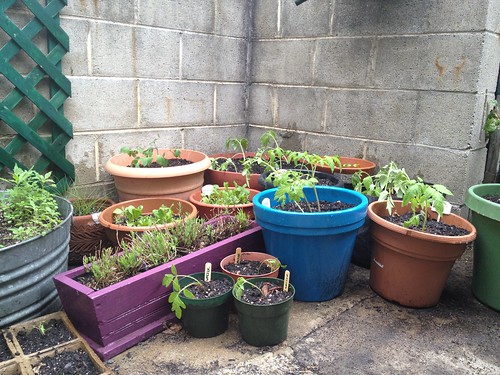 [/caption] As soon as you plant each pot, water it until you see water coming out the drainage holes in the bottom - this will ensure that there's enough water and also that your drainage holes are working.  Then I usually water everything one more time to make sure.  Things'll look a little droopy at first (see above) but in a few days your plants will get used to their new homes and perk up. If you're interested in potting or re-potting some things or have questions on any of this, please join me on Sunday, May 6th from 2-4pm at Passyunk Gardens for the Container Gardening Workshop!  There was some info on it in the latest SPFC newsletter and here's the link to the Facebook event page.  I'll be leading everyone through container gardening basics and offering some insights of my own (naturally.)  Bring your own container and plants/seeds but I'll also have a few containers and extra seeds as well.  It'll be a planting party, which is fast becoming my favorite sort of party.  Hope to see some readers there!
Sarah's Garden Gardening and Farming
Tweet