Hello again!  There has been exciting progress this past week.  First, here's the garden: [caption id="" align="alignnone" width="500" caption="As of May 19"] 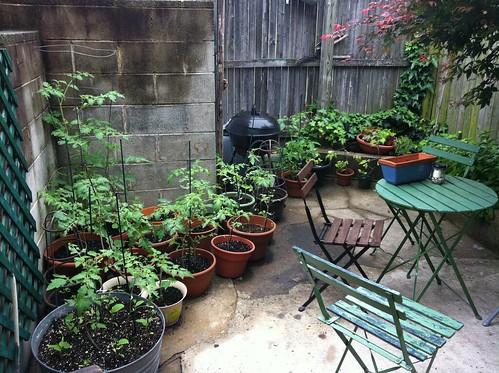 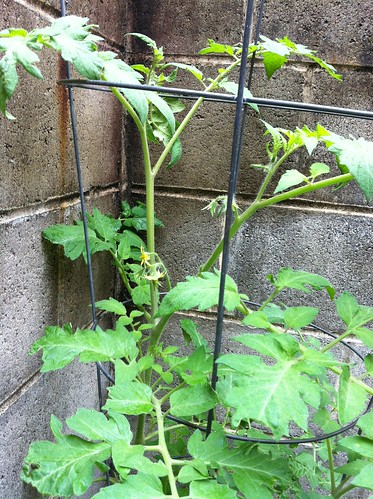 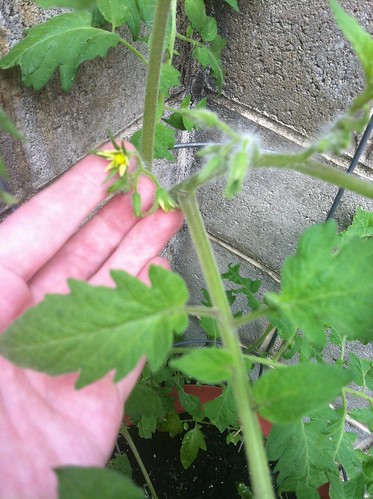 [/caption] Those are both from the same plant, my monster beefsteak that has always been the biggest one.  (I think it needs a name...Beefy?)  But the other beefsteaks are getting flowers, too! [caption id="" align="alignnone" width="374" caption="Pretty"] 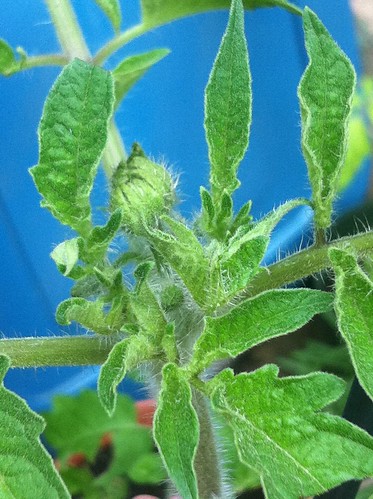 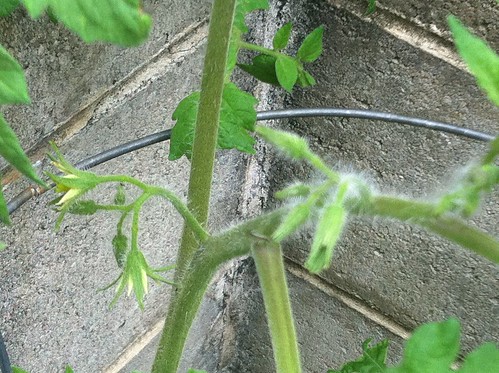 [/caption] It's been raining since Saturday so I haven't had to water at all and I'm hoping for some sunny days this weekend so everything doesn't get too waterlogged.  But the rain has been, for the most part, light and frequent which is how watering should work anyway, so I'm actually kind of thankful for it. I realize I've been focusing largely on the beefsteak tomatoes because they're the biggest, but the beauty queens are getting larger and I'll do a closer look at them in the coming weeks.  The eggplants are still pretty small but I think it's still a bit cold for them.  They apparently do well in hot weather, so once we actually start getting summerish weather I think they'll be happier. On Sunday the rain gave us a bit of a break, so I went outside and retied some of the tomatoes to their stakes and did some weeding.  Now containers usually don't need too much weeding since you use new soil each time, but my big metal planter has had soil in in for a while and look!  Little weeds: [caption id="" align="alignnone" width="500" caption="Just ignore the misshapen eggplant"] 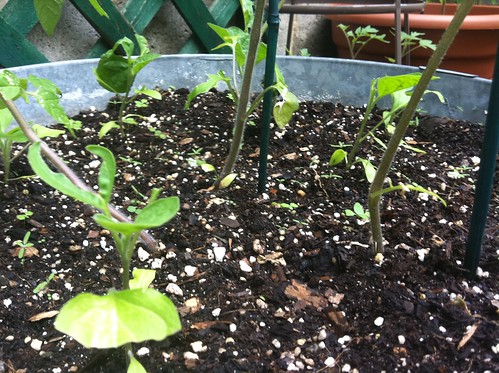 [/caption] So I pulled those little buggers out, trying to get as many of the roots as possible. [caption id="" align="alignnone" width="374" caption="Roots"] 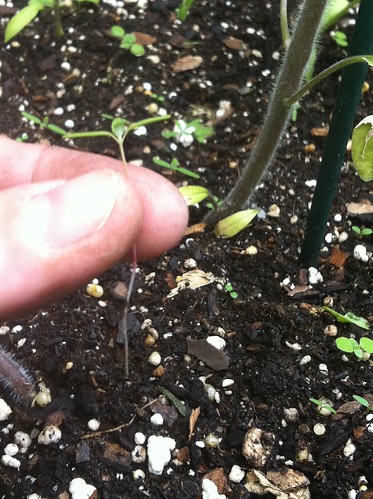 [/caption] And now my tomatoes and eggplants can grow undisturbed (you hear that, eggplant?) While I was weeding, I debated whether I should take the little lower branches and the suckers (that's the actual term, I'm not making stuff up this time) off some of the larger tomato plants.  Suckers are the little shoots that grow from the intersection of the main stem and branches of the tomato plant, and I've been told both to prune them and to leave them on.  Basically it comes down the this:  if you do take those suckers off (ha), the remaining branches get more nutrients and therefore produce bigger fruit.  But if you leave them on you'll get more fruit, though it might be smaller.  If you have a short growing season you probably want to take them off since they'll take nutrients from the rest of the plant and probably not mature in time to produce fruit.  They also tend to make the plant top-heavy, so if you're growing in a small space (yup) they might get too unwieldy.  What to do??  I eventually compromised by pruning some plants and leaving the others undisturbed.  Since then I've decided that I'm going to leave the majority of them on since it's only May and the growing season here is quite long.  If things get too top-heavy then I'll reassess. [caption id="" align="alignnone" width="374" caption="Another shot of the garden...cause I felt like it"] 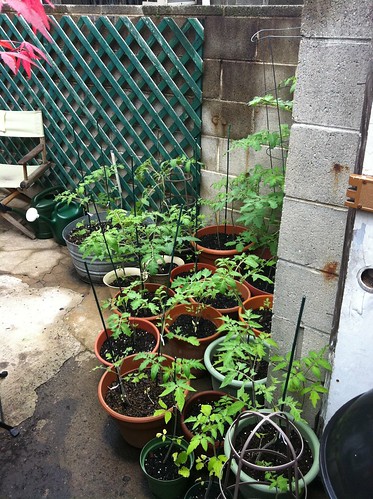 [/caption] The plan for this weekend is to plant some of the basil outside, since it's getting quite crowded in its little indoors pot: [caption id="" align="alignnone" width="374" caption="Excuse my thumb"] 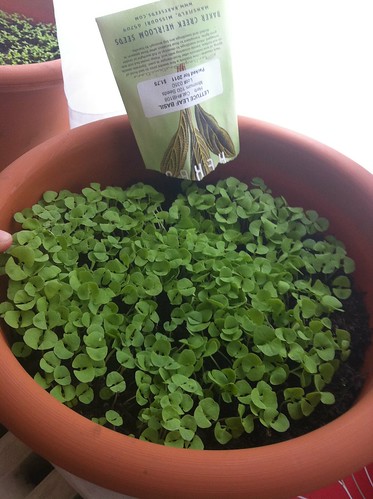 [/caption] I know it hasn't reached the two-sets-of-leaves phase, so maybe I'll just thin it out a bit since I actually don't need 40+ basil plants.  Maybe one of my dedicated readers wants some?  Let me know! One little basil also somehow crept in to my feverfew... [caption id="" align="alignnone" width="374" caption="See it?"] 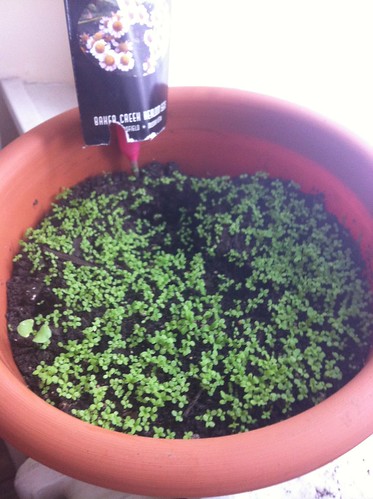 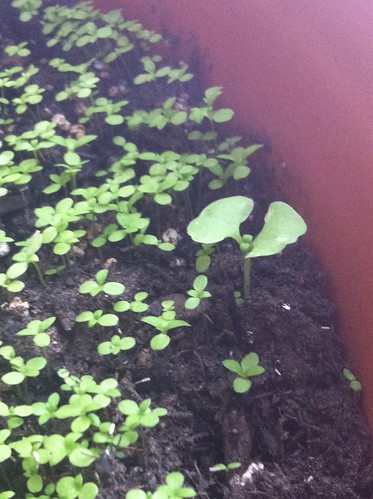 [/caption] As always, I'll be back next week. Sarah DeGiorgis has lived in Philly for five years and is finally starting to feel like a true Philadelphian, though she still detests cheesesteaks.  She enjoys reading, watching bad tv, eating and cooking good food and digging in the dirt. Catch up with her continuing efforts to grow food in South Philly by clicking here.
Sarah's Garden Gardening and Farming
Tweet