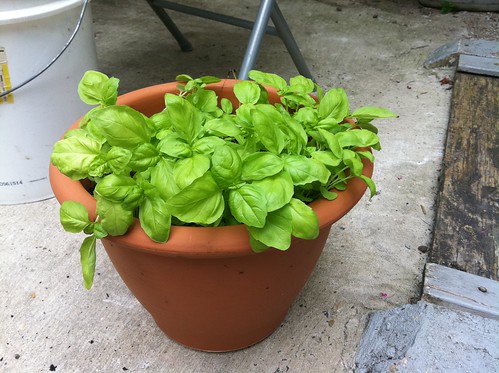 [/caption] So I had to repot it.  I’m getting a little low on both containers and space so I ended up throwing out (or “composting” in my “compost” bucket - quotes because it’s mostly just weeds and things from the tree that I’m hoping will break down into something usable) lots of little basils.  Here are some of the casualties: [caption id="" align="alignnone" width="500" caption="Basil aftermath"] 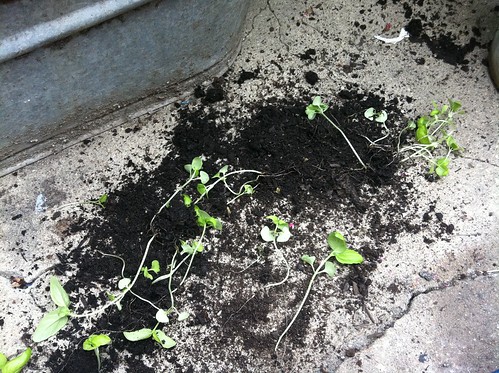 [/caption] But!  Then I had the idea to take all the baby basil leaves that I was going to compost and make pesto!  I’ve never made pesto before because I’ve never owned a food processor.  My roommate, however, does.  So I got as many of the little basil leaves as I could and ended up with a little over a cup.  Not much, and definitely less than most recipes call for, so I just washed all the dirt off of them and put them in the food processor with some pine nuts, grated parmesan, and a clove of garlic.  Once I figured out how to use the food processor (not entirely self-explanatory, okay?) I poured in a little stream of olive oil as it all whirred around and in about 5 seconds I had pesto.  Wow!  There wasn’t much of it (like I said, I only started with about a cup of basil) but it was delicious and a very pleasing shade of light green thanks to the baby basil leaves.  Sadly I have no picture because my "camera" (iPhone) was acting up.  But I’m looking forward to more basil and more pesto! [caption id="" align="alignnone" width="500" caption="Repotted basil looking a little sad"] 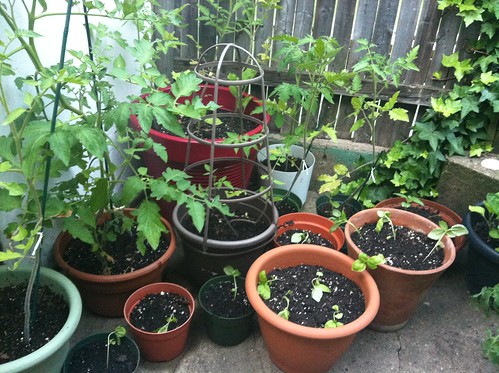 [/caption] You see the brown pot with the cage over it in the above picture?  Those are my heirloom tomatoes, the beauty queens.  Here’s a closer look: [caption id="" align="alignnone" width="374" caption="Beauties!"] 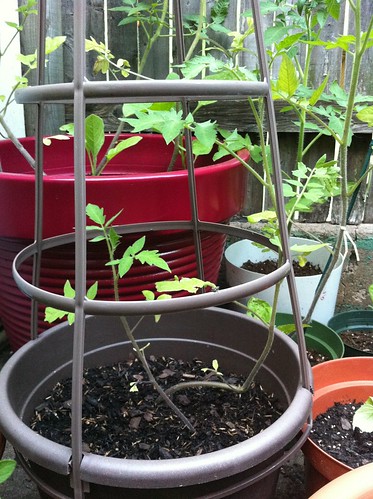 [/caption] As you can see, they’re quite a bit behind the beefsteaks in terms of size.  They’ve definitely always been smaller but the beefsteaks really took off once they got outside and the beauty queens did not.  The beauty queen stems are a lot thinner and there are no signs of flowers.  But the above ones are actually bigger than these babies: [caption id="" align="alignnone" width="374" caption="come on!"] 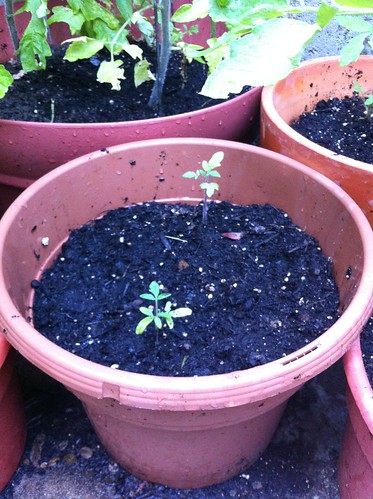 [/caption] Really, beauty queens??  You look like you did the day I transplanted you and that was over a month ago.  I guess some varieties of tomatoes just grow more slowly?  Or maybe their roots need to grow before the plant does?  Who knows.  All I can say is that I’m running low on space so you’d best start pulling your weight soon, beauty queens. [caption id="" align="alignnone" width="374" caption="Why can’t you be like your beefsteak brethren?"] 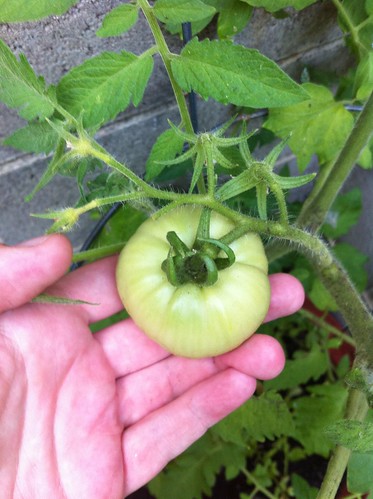 [/caption] Another thing I’ve noticed is that, while most of the beefsteaks are growing straight up against their supports (bamboo stakes and one metal cage), some seem to really like growing horizontally.  Like this one: [caption id="" align="alignnone" width="500" caption="That’s fine, I didn’t want you to grow vertically anyway."] 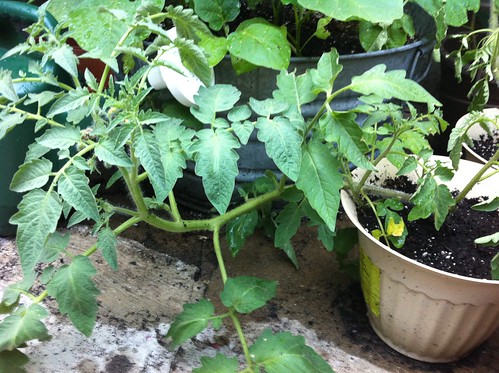 [/caption] I assume it’s because I didn’t stake them in time, but now I’ve got two plants like this.  I tried to stake one but I accidentally snapped the stem!  So now I’m not fighting it - if they want to grow horizontally they are welcome to, I just need to move around my tomato “patch” so these two don’t get stepped on.  Whatever you like, monkeys. As for the other plants, my sunflowers and squash are coming along nicely: [caption id="" align="alignnone" width="500" caption="I can’t wait for sunflowers!"] 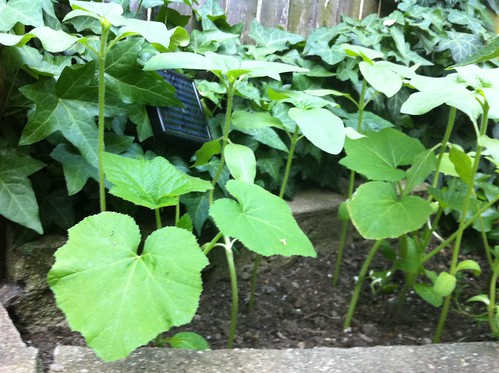 [/caption] And little lavender is flowering: [caption id="" align="alignnone" width="500" caption="Obviously that’s not rain in all these pictures...I had just watered."] 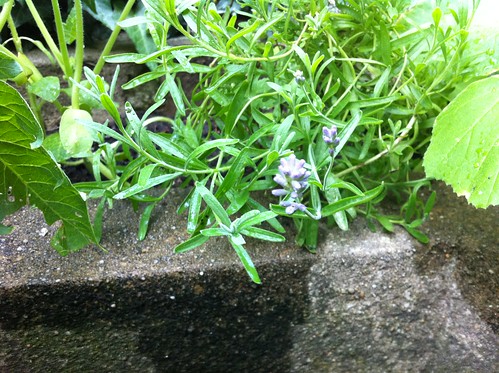 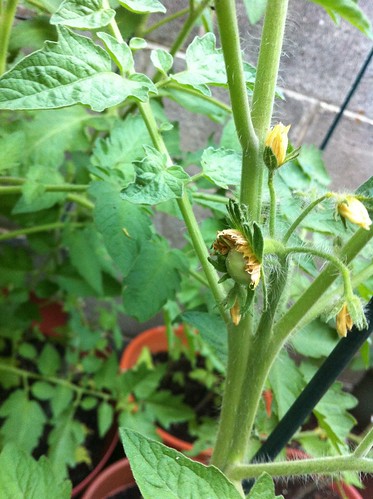 [/caption] And now some random things:  the deadline for that PHS city garden contest I mentioned a few weeks ago is tomorrow!  So any fellow city gardeners out there, I urge you to enter.  I just did! And the most exciting news of all is that the South Philly Food Co-op is now accepting member-owners!  One of the reasons I like co-ops so much is that, since members are also owners, everyone is really involved in all aspects, from board elections to how the co-op is run to what the co-op actually sells.  And, in this case, where it actually is!  I got involved in co-ops in college and am really excited to be a part of one again.  Here is some information on joining the South Philly Food Co-op! I'll be back next Thursday with another update!  And hopefully fewer exclamation points. Sarah DeGiorgis has lived in Philly for five years and is finally starting to feel like a true Philadelphian, though she still detests cheesesteaks.  She enjoys reading, watching bad tv, eating and cooking good food and digging in the dirt. Catch up with her continuing efforts to grow food in South Philly by clicking here.
Sarah's Garden Gardening and Farming
Tweet