Time to take the garden outside and play

Hello again!  Things are moving along in my little corner of South Philly.  My garden has gone from this: [caption id="" align="alignnone" width="500" caption="Not really a garden..."] 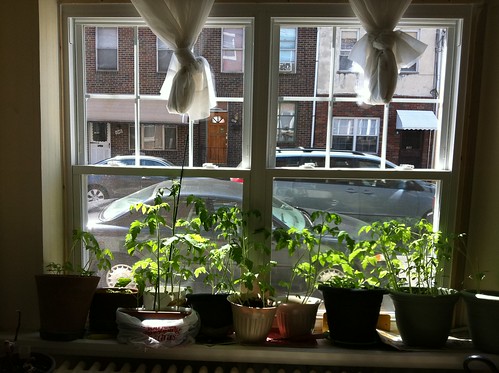 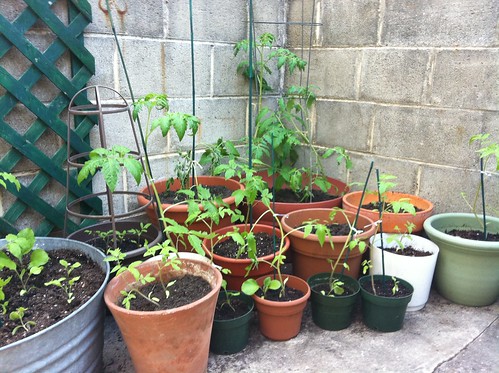 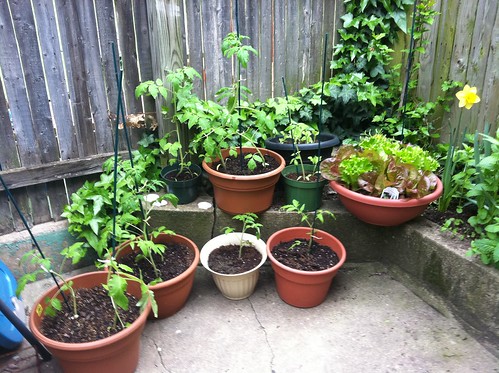 [/caption] Nice!  So now everything is outside:  "everything" being the beefsteak and beauty queen tomatoes and the eggplants.  I still have other things to plant outside, like sunflowers and summer squash, but I only have so much precious weekend time.  There are also some tulip and daffodil bulbs that I planted very late in the game that have started blooming so I decided to let them keep going and focus on replanting all the tomatoes and eggplant.  Here is the raised bed now, with daffodils and one red tulip hiding amongst all the mint: [caption id="" align="alignnone" width="500" caption="So much mint"] 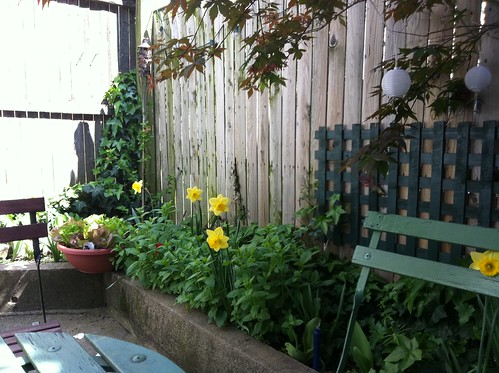 [/caption] A note on this mint:  it's crazy!  But seriously, this is the third year I have had this particular mint plant and every year it comes back stronger than ever.  It requires NO work (except the occasional thinning out of the plants unless I want it to take over the entire backyard) and in the winter I just cut it down and it comes right back up in the spring.  It's great to have though, even just to throw a few sprigs in some iced (or hot) tea or just plain water or iced coffee.  And things like mojitos and juleps are fun (the latter especially if you're having a Derby party this Saturday) but a sprig of mint goes well in pretty much any drink.  You can also throw some leaves in salads and it pairs well with lots of lamb dishes.  Versatile! Anyway, the actual planting of all the tomatoes and eggplants took both Saturday and Sunday afternoons (sure, I could have started in the morning and gotten this done in one day but my weekend mornings are reserved strictly for sleeping and brunching.)  I planted 28 pots in all and went through three BIG bags of potting soil and two smaller ones, plus another bag of my trusty compost.  The biggest obstacle this time around was water.  Thanks to all the rain we've been getting, everything was really wet.  The potting soil had been sitting outside, so all three big bags were wet - the one on the bottom was actually closer to mud than soil.  There are also two large metal planters left over from a previous tenant and they already had soil in them from last year.  Unfortunately that was also pretty muddy and there are no drainage holes in either of them so I had to use other pots.  I actually had some luck with just cutting the bags open and leaving them in the sun for a while to dry out the soil on Saturday, but Sunday I started running out of soil and the sun was not as strong.  Long story short I ended up using one of the metal planters for some beefsteaks surrounded by eggplant: [caption id="" align="alignnone" width="374" caption="Please survive?"] 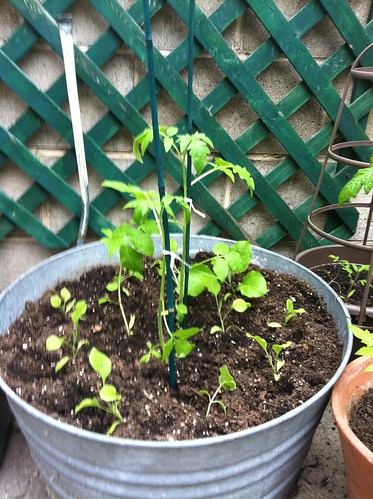 [/caption] We'll see how that goes.  And here are the plants right after I planted them, looking a little droopy and over-watered and sad: [caption id="" align="alignnone" width="500" caption="Sad plants"] 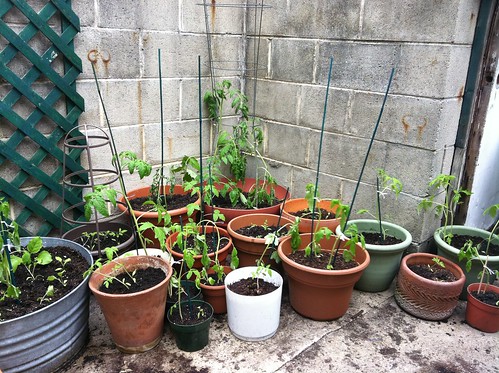 [/caption] Two days later, they are less droopy but I still haven't watered them yet, which shows how wet the dirt actually was. Another challenge was (again) actually transplanting the plants - untangling them from themselves and attempting to keep as many of the roots intact as possible.  Even the beefsteaks, which were all at least about a foot tall, had insanely delicate roots.  I'm going to get really scientific on you here, so get ready:  roots are really important.  Even more important than the part above the ground, since a plant gets the vast majority of its nutrients and water from the soil (this is also why good soil and compost are important.)  Here's a picture of one of the little eggplant's roots so you can see how big they actually are in relation to the rest of the plant: [caption id="" align="alignnone" width="374" caption="What am I doing with my hand?"] 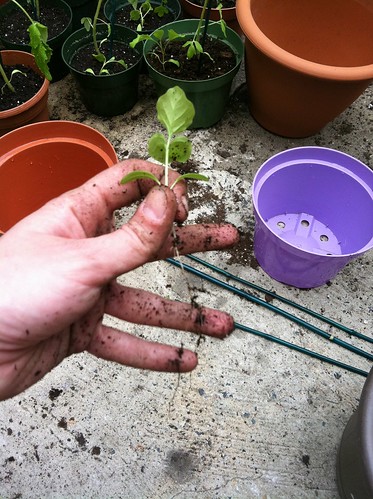 [/caption] Kind of like that overused analogy of an iceberg, the biggest part of the plant is actually what you can't see!  So you want to be very careful when transplanting to try to get as many of the roots as possible.  I actually found it easiest to just dig in there with my hands - this way I could feel the roots instead of just shoving a spade down there and breaking lots of them.  Of course, then your hands will end up looking like this: [caption id="" align="alignnone" width="374" caption="Attractive!"] 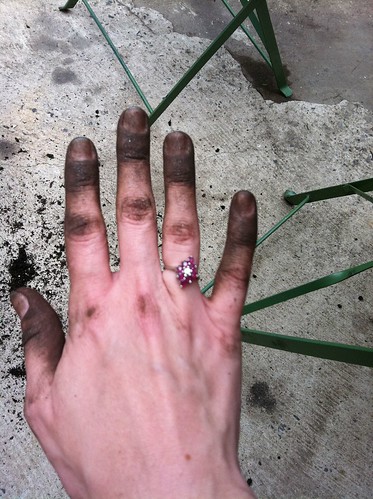 [/caption] But getting your hands dirty is fun, right?  I thoroughly enjoy it, but do be prepared to have dirt under your fingernails at all times.  No more manicures for a few months. The plan in the coming weeks is to make sure what's outside doesn't get too wet/dry/cold and give away some of the smaller pots of tomatoes to make room for more plants!  I am also starting some more things inside:  basil and feverfew.  I've never grown basil from seed and I'm not entirely sure what feverfew actually is other than I love the name and it has pretty little white flowers. Just for fun, here's a picture I took of two of the daffodils.  Look at them poking their little heads through the chair! [caption id="" align="alignnone" width="374" caption="Cuties"] 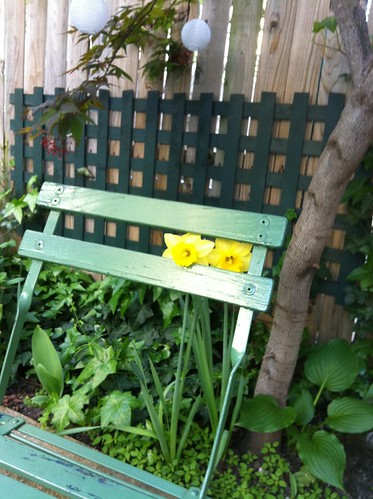 [/caption] So stay tuned!  I'll be back with another update next week. Sarah DeGiorgis has lived in Philly for five years and is finally starting to feel like a true Philadelphian, though she still detests cheesesteaks.  She enjoys reading, watching bad tv, eating and cooking good food and digging in the dirt. Catch up with her continuing efforts to grow food in South Philly by clicking here.
Sarah's Garden Gardening and Farming
Tweet