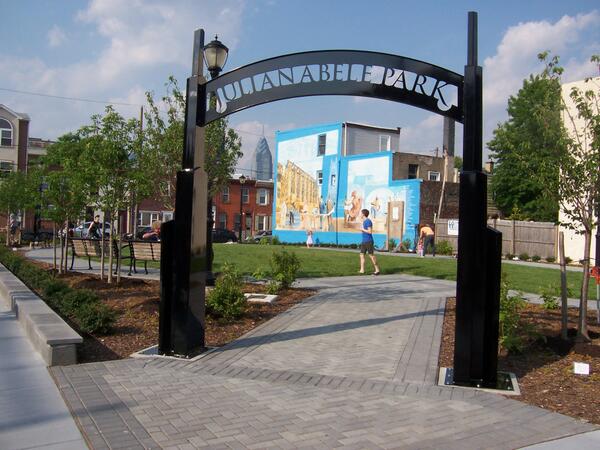 We're counting down the days till the South Philly Garden Tour! Check this blog early and often for details on participating gardens, tour hubs, swag, press and much more! Hope to see you September 12!

This year's South Philly Garden Tour Hub, where you'll check in and grab your program and swag bag, is Julian Abele Park. Located on 22nd Street between Montrose and Carpenter, it was Philadelphia's first new public park in over a decade when it opened in 2008.

Named after a South Philadelphia resident, architect Julian Abele, who was the first black graduate of the University of Pennsylvania's Architecture School and contributed to the design of the Philadelphia Museum of Art and the Central Branch of the Free Library of Philadelphia.

The Friends of Julian Abele Park commissioned local artist Christopher Wheeler to create, fabricate, and install its beautiful perimeter fence and gate. The design was inspired by Mr. Abele's design of the Duke University Chapel (depicted in the mural at the rear of the park).

The park sponsors a weekly farmers' market (Tuesdays from 2-7 p.m. through early September) and plans to add bike racks along 22nd street and replace the existing lighting with energy-efficient LED fixtures.