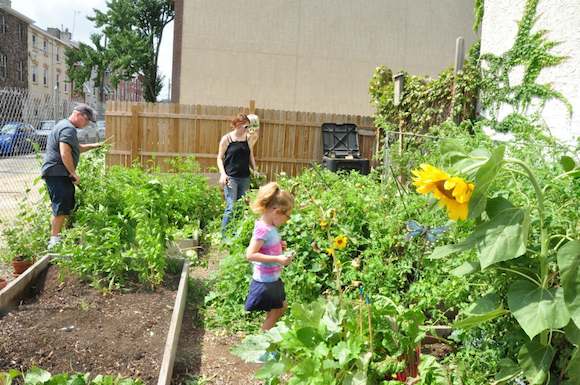 The dedicated group behind the nascent South Philly Food Co-op has been working to make that happen. They want to bring a member-owned and managed grocery store to the neighborhood, and they're getting close. The newly-launched "75 in 75" campaign -- that's 75 new members in 75 days -- will take them over their next membership threshold and move the project into its next phase: location hunting.

"Our timeline is primarily membership-driven," explains board member and Membership Committee Chair Cassie Plummer. "Our next major benchmark is 400 members, at which point we can actually pursue a location. That number will support our business plan as we move forward."

Even without a physical location, the group has been gathering momentum. They host events, including lectures, garden tours and even a recent "Soup Swap." They hope that by demonstrating how fulfilling community building can be, they can make the case for locals to fork over that initial investment. $200 buys lifetime status as a member-owner.

Fortunately, the Co-op hasn't been tackling this logistical task alone. They've received support from the Food Cooperative Initiative, a group that helps fledgling co-ops with strategy and paperwork. They've also interviewed other young co-ops in order to set feasible benchmarks.

But mostly they've been trying to build buzz -- to get South Philly folks excited about a neighborhood grocery store packed with locally-sourced and produced products and bulk items. The organizers also envision the space as a community hub.

"I think we have a really diverse community and there's a lot of really strong neighborhood groups," says Plummer. "What's going to be awesome about the co-op is that it's going to pull those groups together and really create this awesome, eclectic community around food and food education, while also providing a great place for shopping."

As for the next challenge, location selection, there are sure to be a lot of opinions. The search will focus on simple criteria: Is it convenient for members? Is it near a major thoroughfare? Is there enough foot traffic? It is near public transportation? Is the space big enough?

If you want to have a say in that process, all you have to do it sign up (and fork over a bit of cash).

"We have a lot of great people working on the project and a lot of great events, and I can already feel the community building," says Plummer. "I can't wait to have a physical location that's the symbol of the community where everyone can gather and have awesome food."