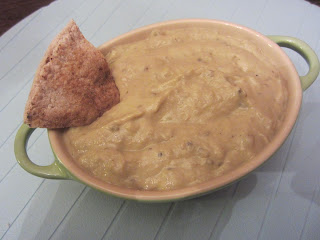 Baba Ghanoush? Baba Ganouj? Eggplant dip. Smoky, creamy eggplant dip. Thick and smooth, I don't want to knock hummus, but when I'm served hummus and baba ghanouj on the same plate, it's the eggplant dip that goes first. And, much like hummus, baba ghanouj is really easy to make. Even better than hummus, baba ghanouj is really easy to freeze, so you can have the goodness of eggplant season whenever you need it. But I'm not being fair to hummus, and that's not why we're here.Baba ghanouj is typically what I make when I'm afraid an eggplant isn't going to last long enough to use in something else. It's easy to bring with some pita and a salad for lunch. And, as above, it freezes. Preheat the oven to 350. I could see the merit in roasting garlic for this, but at the same time, that means its 40 minutes longer - with a hot kitchen - before the baba ghanouj is ready. So I don't go as far as roasting it until it's smooth and nutty. If you have pre-existing roasted garlic, this would be a great time to use it. Instead, I toss a few cloves into the oven while I'm prepping my eggplant, and leave them in the while I bake my eggplant. It all works out. 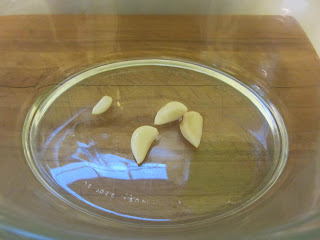 The real action starts off with a mess on my stovetop. Just like when I'm grilling corn or roasting a red pepper, this takes place right on my gas burner. If you have an electric range, or are just horrified at the prospect of doing this, you can go outside and grill it. What you want is for the eggplant to take on some smokiness. You'll finish cooking it in the oven. Place a whole, washed eggplant right on your washed burner. Turn the stove on. 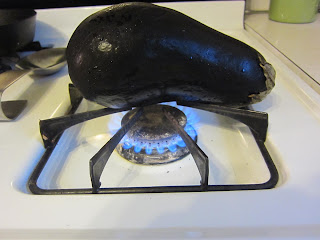 Use tongs to rotate the eggplant and make sure that it's not on fire. 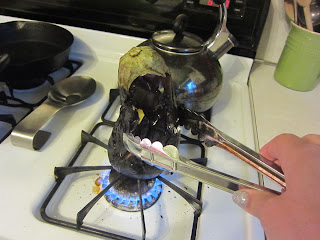 After about 10 minutes, depending on the size of your eggplant, it should have sort of collapsed. It'll be difficult to attack with tongs. 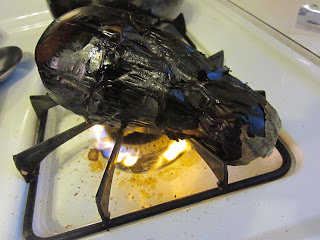 This is when you put it in the oven, to join those garlic cloves from earlier. Give that 20 minutes to a half hour in the oven until soft throughout. 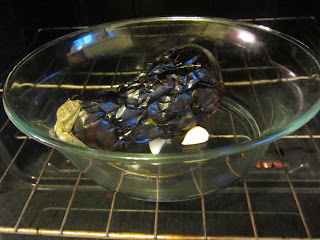 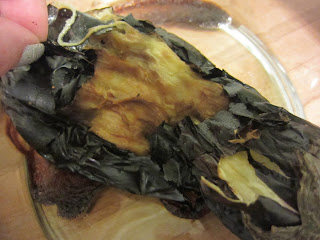 Dips, like salad dressings, aren't all that pretty, so if you're someone who might get upset at an eggplant that's all smushy, don't look. Ok, you can handle it, right? 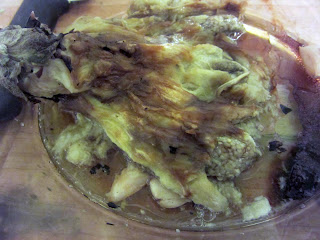 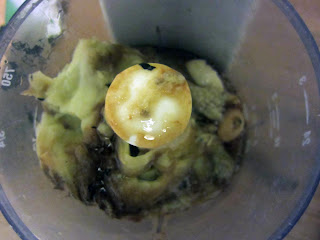 I'm not a huge tahini fan, and I use considerably less of it in both my hummus and my baba ghanouj than other recipes call for. If you do it my way and find yourself missing that sesame goodness, just add more. It's a pretty flexible recipe. I add two tablespoons of tahini per eggplant. 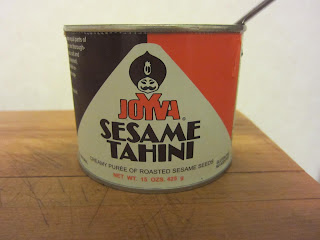 Whirr that together in the chopper or processor and see if you need more. And if you have a lemon on hand, that's way better, but I use a tablespoon of this stuff. 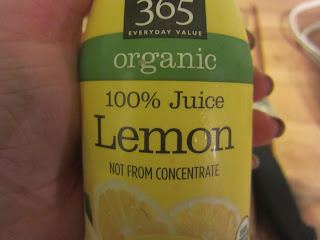 Also, olive oil, cumin and salt, which somehow managed not to be photographed. Start with a tablespoon of olive oil and add more if needed. Some people garnish the top with olive oil but I don't think that's necessary. I used a quarter teaspoon of both salt and cumin. Then whirred it again in my chopper. 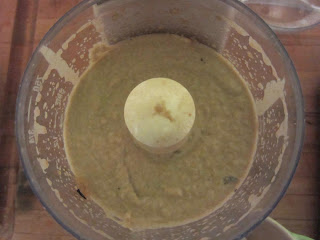 This made enough to be a hearty side dish in four lunches, or an appetizer for eight or so. 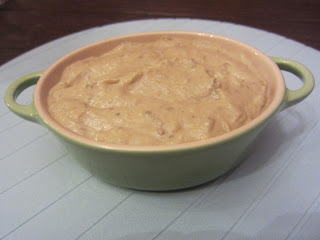