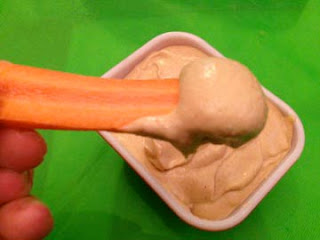 Hummus is one of those foods that I had never thought of making on my own, until one day I did, I was shocked at how quickly it came together. Other than causing me to purchase tahini, which I really had no other use for, hummus is simple. Average hummus is simple. Ok hummus is simple. But you can do better too. Chickpeas, tahini, lemon, oil, water, garlic, salt, processor. That's all you need. Garlic hummus is one thing, roasted garlic hummus is entirely another. The garlic flavor is milder, nuttier, and more distributed throughout the hummus. There aren't tiny bits of garlic throughout, rather some of the creamy goodness is chickpeas and some of the creamy goodness is garlic, and the flavor is deep and rich and integrated. This is just better. Garlic. 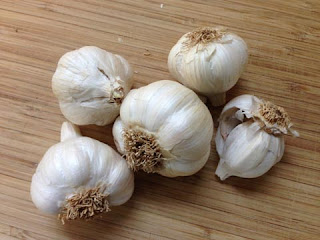 First, roast your garlic. I'm making a little over two cups of hummus and using 5 small heads of garlic. This is a lot. Use less, unless you love garlic. My garlic is old. My garlic is not bad, but it's not super fresh either. So my garlic has green sprouts. Some people argue strongly that you need to remove these because they're bitter. Some people say that you need to remove these because they're tough. I don't listen to those people, but if you're particularly sensitive to this, go ahead and remove any green sprouts. Otherwise, just use your garlic. Cut into each head to expose all the cloves, spritz with olive oil and either place in a tiny covered container or wrap with alumnum foil. Roast at 400 for an hour or so until the cloves are brown and soft and sweet and nutty. Set aside to cool. 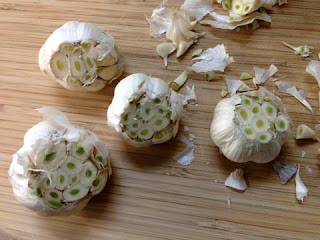 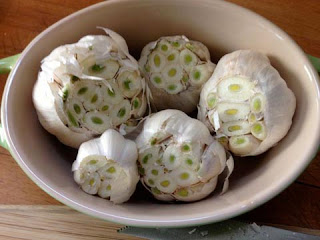 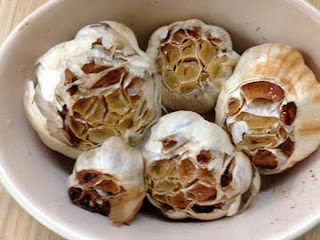 I know, you're saying to yourself, "That's a lot of wasted garlic!" To which I say no. We don't waste garlic. You're looking at a woman with a freezer full of bread ends and mushroom stems and brown bananas. Pick your garlic ends out of their papery shell and freeze them. They'll be a bit milder when they're defrosted but still perfect for mincing into whatever dish you're making. 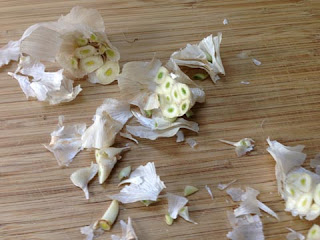 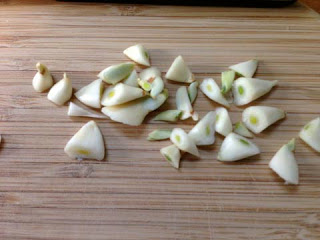 Chapter Two: Chickpeas. Either you've soaked and cooked some chickpeas or you've opened a can or box of garbanzos. I like these because I don't have to worry about the can...and if you're not worried about cans, I suggest you don't Google and go on your merry way eating out of cans without the bat of an eye. We have too much to worry about. 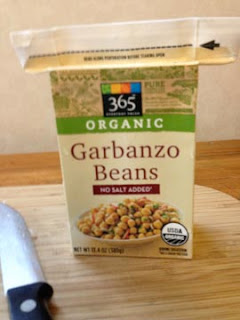 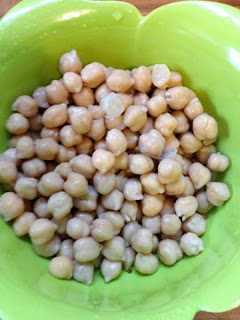 Peel your chickpeas. This is tedious, sure, but so is eating gritty hummus. Peeling one chickpea is fun. By the 50th chickpea it's not so much. Pinch it between your forefinger and thumb and shoot it into a bowl, retaining the skin between your fingers. Make gun noises. Until that gets old. Rub a handful between two open palms and separate the skins from the chickpeas. Fill a bowl with water and chickpeas. Assault the chickpeas underwater to loosen the skins and then skim the surface of the water for floating skins. There are several ways to do this. I promise it's worth it. 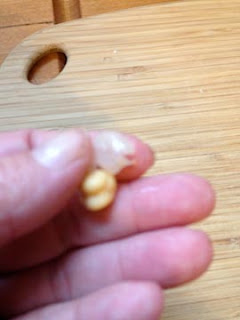 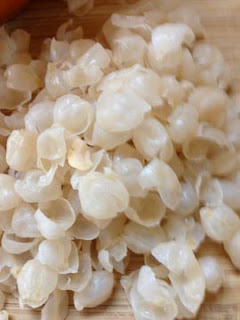 I think naked chickpeas look like tiny turkeys. Picture a turkey on the scale of a Lego minifig. If your Lego men and women have a kitchen, a chickpea would be their turkey. 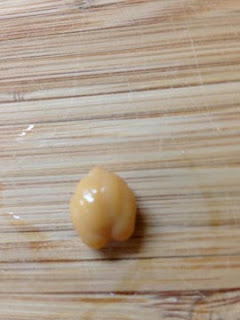 Now you're almost done. Chickpeas and garlic go into a food processor or your little as-seen-on-tv chopper or your million-dollar blender. 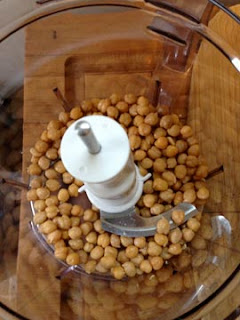 Add your garlic. This is an impossible to photograph process, because your hands will be sticky with garlic. First, make sure your garlic is cool enough to touch. Then squeeze it out of it's papery shell into your food processor. This is fairly icky, but it's worth it. 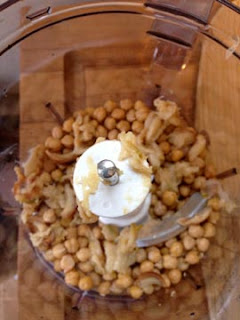 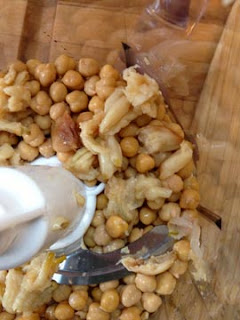 Give that a whir in the processor. 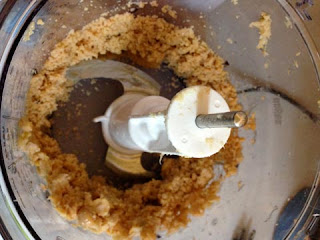 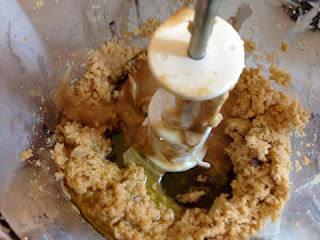 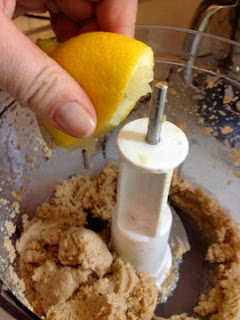 A quarter cup of tahnini and a quarter cup of olive oil is a good start. The juice of a lemon. Give that a whir together until it's all incorporated. Now season. Salt. Cayenne. Maybe some onion powder. Chives. Whatever pleases you. I hold to my belief that onion powder is an entirely different food than onion. Onion powder has an ability to pull a dish together much in the way that salt lets you taste it. But lots of "real" cooks out there tell us that if we're using dried spices we aren't really cooking. Don't listen. This is really cooking. Ok, no heat, but still. Preparing. Either way, start light, especially on salt, and build. Give it a whir and ask yourself if it needs more. Give it another whir. 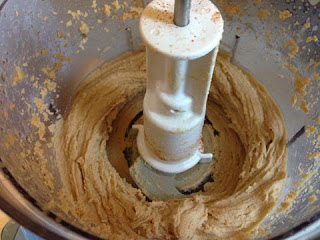 At this point, if you're like me, you have delicious, smooth hummus that's a bit too thick. Water time.  Add a couple tablespoons and whir. How's it doing now? 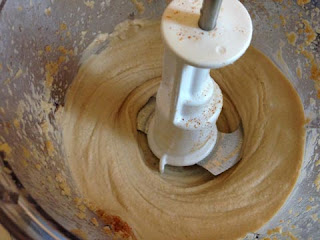 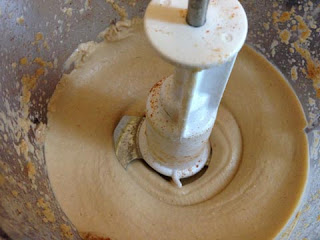 Keep going until you have super smooth creamy hummus in the thickness you prefer. I like it pretty thin, but not runny. 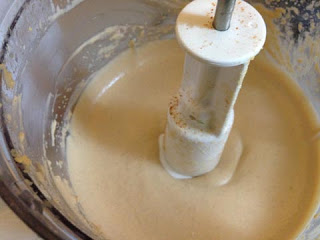 It thickens and the flavor intensifies a bit as it sits in the fridge. 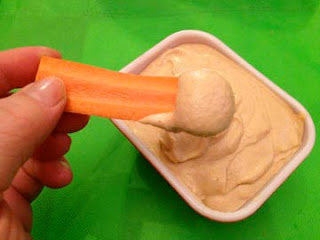 This recipe is cross-posted at SaturdaysMouse.com where I’m working on making food out of food.

Creamy Roasted Garlic Hummus Ingredients Instructions To roast garlic: Preheat oven to 400. Slice ends off heads of garlic to expose cloves. Spritz with olive oil. Roast in small dish with a lid or wrapped in aluminum foil for an hour until brown and soft. Set garlic aside to cool. Peel chickpeas either by shooting them out from between thumb and forefinger, rubbing between hands or another method. Discard skins. Add chickpeas to food processor, fancy blender or little chopper. Squeeze garlic in. Blend until chopped finely. Add olive oil and tahini. Blend. Add salt, lemon and cayenne. Blend more. Add water by the tablespoon, blending in between until desired consistency. If using cooked dried chickpeas, use cooking liquid instead. Serve cold or room temperature. Details
Recipes
Tweet