How to Measure and Convert 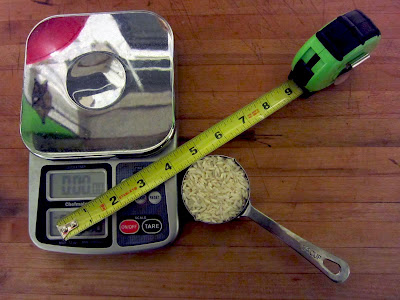 The thing that stresses me out in the kitchen is measuring, so I try to avoid it. Over the winter, I made my version of the conversion chart/art "(ch)art?" I saw on The Kitchn, and that helps with some of it. 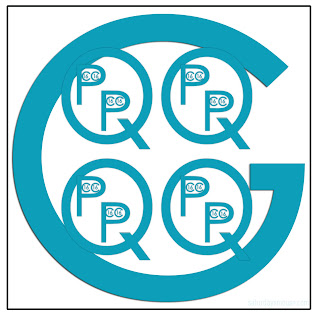 But there are other measurements that I keep having to Google*. As I mentioned when I first posted that (ch)art - and I'm going to have to trademark that word and make it my own - I often have to Google the conversion from packet of yeast to jar of yeast (it's 2.25 teaspoons). Here are links to some nifty online conversion tools and printables that you can tack up on the inside of your cabinet door.The one that really hangs me up is the butter. I don't buy my butter in sticks, so I have to weigh it. I have no idea what a stick, or a cup, or three tablespoons of butter is. I'm never going to have a brick oven, or need brick oven cooking advice, but I've bookmarked TraditionalOven.com (and it's exactly that) because of their awesome butter converter. I could convert ounces to teaspoons, or grams to cups, or cups to grams, or sticks to fathoms. Ok, not fathoms. 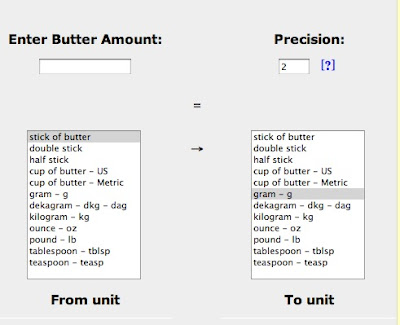 On the right side of that website there are more than 30 other converters, for everything from flour to temperature to precious metals. But whoa do I use that butter converter. Similarly, Convert-me.com has everything from ounces/spoons/liters to measures of radioactivity and fuel economy. These online converters are great if you have a tablet in the kitchen or your hands aren't so dough-covered that you can't run to the computer. When online tools just aren't the answer, it's handy to have something printed and within easy reach. Cookbook People has a downloadable PDF that looks a bit busy because it has everything - pan dimensions to volume, how much solid cheese you need to start with in order to end up with the right amount of grated cheese, and cooking time for hardboiled eggs. I wouldn't usually link to this but I keep seeing references to it - Martha Stewart has some downloadable measurement tools... everything from ounces and cups to candy-making temperatures. If Martha's not your type, Remodelaholics has a pretty printable that includes metric conversions, so we can cook like the rest of the world**. One more like that - ishouldbemoppingthefloor has a nice downloadable printable conversation chart that includes bushels to pecks as well as safe meat temperatures. TipNut has a full page of substitutions. Sure, I've clabbered milk before to sub for buttermilk, but I've never made faux soy sauce with molasses, ginger, worcestershire and flour. Seriously? Where's the salt? If you have an old-timey, classic cookbook, the back pages often have conversions and substitutions.  These are much handier than the tables of random numbers you'll find in the back of your old statistics text. This is cross-posted at Saturday’s Mouse, where I’m working on making food out of food. *Conversions remind me of the old Saturday Night Live commercial - series of commercials, actually- for First CityWide Change Bank. There are three of them. They're 25 years old and still entirely hilarious. **We're one of three countries that isn't metric.
Recipes
Tweet