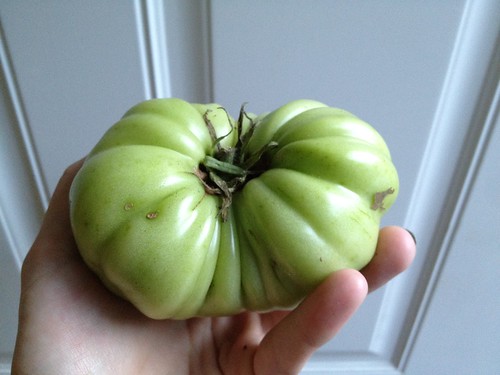 Tomato![/caption] Since my tomatoes were a little, uh, delayed this year due to multiple moves, I hadn't had more than a few tomatoes at a time.  But there's always this time when they all come at once and friends, we have reached it.  I picked a lot of these while they were still green because in my experience tomatoes will either rot or be eaten by insects and animals before they have a chance to fully ripen outside.  I just set my green tomatoes someplace darkish - I don't bother with that wrapping in newspaper nonsense that I tried last winter - and leave them for about a week, checking every so often to make sure nothing's rotting.  Like so: [caption id="" align="alignnone" width="500"] 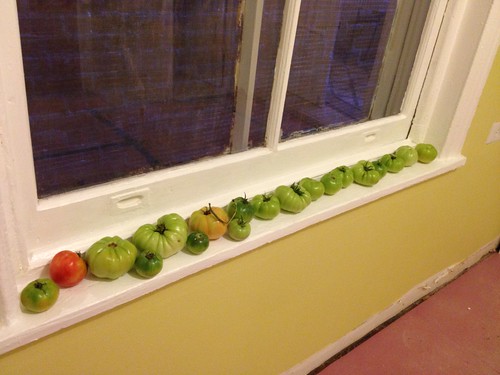 row of tomatoes[/caption] Those tomatoes above may be on a windowsill but they actually won't get any sun...confusing, I know.  Row houses!  I just don't have any real counters yet in my kitchen so the windowsill will have to do.  This is a little more than half my harvest because I gave away a big bag of them to a friend.  Someday I'll learn to can things and make up a big batch of tomato sauce to use throughout the year but since my stove is sitting in the middle of the living room this is not the year for that.  Also it feels selfish to keep three or four dozen tomatoes to myself:  my boyfriend and I love tomatoes but I don't think anyone can love tomatoes that much. The red tomato in the row is a Dr. Walter and very prettily heart-shaped: [caption id="" align="alignnone" width="375"] 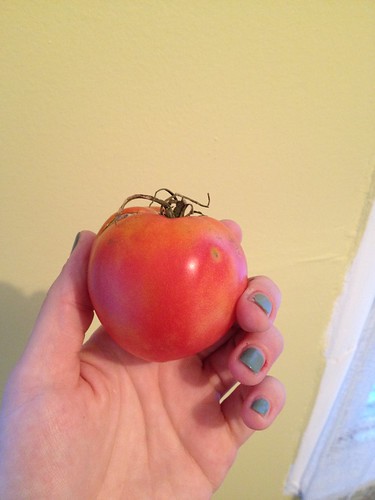 Dr. Walter, I presume...wait, I've already made that joke[/caption] Such a perfectly tomato-y tomato!  Unfortunately it tastes, well, gross.  I mentioned this before when I got my first Dr. Walter:  they're just kind of bitter.  I thought that first one might just be a fluke, but these new ones were grown in different soil (back when I had gazillions of gardens) so I think it's just the variety of tomato.  Everything I read said that they were good for markets because they were pretty and that part is true, but I really don't like the taste.  I think these will be turned in to sauce... I leave you with an updated view of the bathtub in all its vegetable goodness.  Welcome, fall! [caption id="" align="alignnone" width="500"] 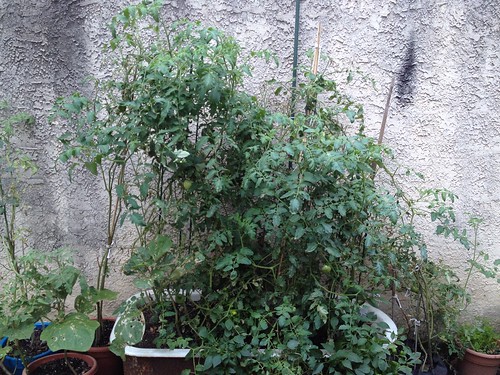