Today I thought I'd go in a bit of a different direction:  history!  I've been looking through a book about the history of botany and I thought I'd share a bit.  This book is called Herbals, Their Origin and Evolution:  A Chapter in the History of Botany, 1470-1670 and is by Agnes Arber.  The first edition is from 1912 but I have the second edition which is from 1953.  Ms. Arber covers lots of different things in this book, from Aristotelian botany to how the herbal was used all over Europe to the history of plant description and classification.  Since I don't want to bore you to death, I thought I'd just show you some of the pictures because it's pretty uncanny how good and accurate most of them are. First off, an herbal is a book explaining the uses and descriptions of plants.  Many of these focused on plants that were used for medicinal purposes but later they moved more towards classification.  The Greeks wrote the first herbals (that we know of) but starting in the 15th century, as all that knowledge was being re-discovered during this time called the Renaissance, Europeans picked up on it too, with expanded herbals and even early plant classification.  The later drawings ("later" being the 17th century) are meticulous and sometimes include animals that often live near the plants.  They also usually draw not only the plant but also the roots and sometimes the nearby habitat. The earlier drawings often include details from a well-known story or myth about a certain plant.  Take the narcissus, for example: [caption id="" align="alignnone" width="375" caption="so these are all photos of book pages as you can obviously tell. not very professional but the best I can do at the moment. this is page 32."] 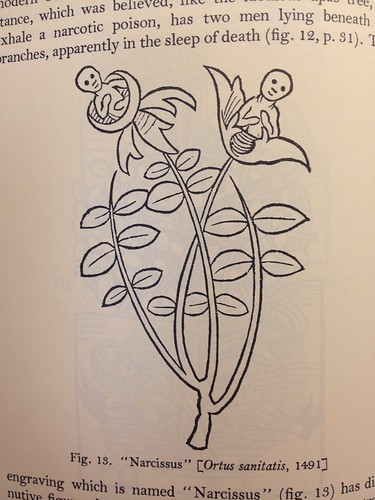 [/caption] Now this doesn't necessarily look like the narcissus flower, but the point here is clearly to illustrate the myth of Narcissus -- you know, the guy who can't stop staring at his reflection and eventually dies (of...starvation?  I was never too clear on that one.)  But I just love the fact that someone thought narcissus should have little Narcissuses (?) growing out of each flower.  In 1491.  Because...obviously. It's also interesting to see how the pictures evolved over time.  Here's a water lily from 1499: [caption id="" align="alignnone" width="375" caption="page 169"] 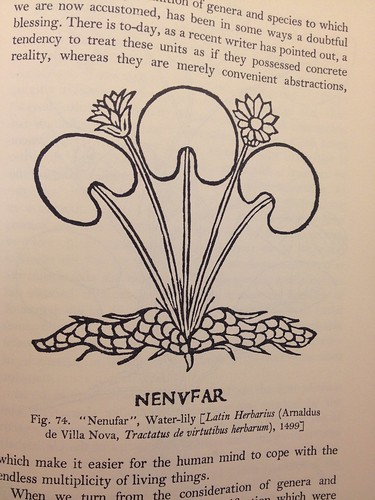 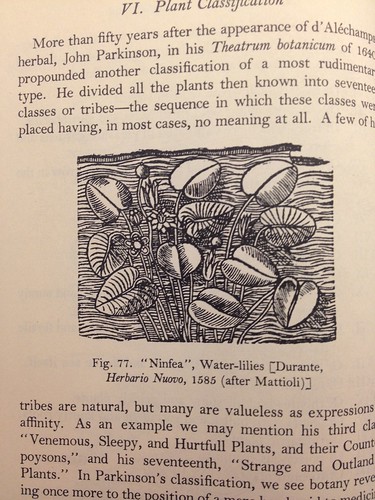 [/caption] I think it's pretty amazing how much more detailed the one from 1585 is in comparison with the one that's less than a hundred years older.  But the earlier one definitely gets the shape of the flowers and the leaves right; I'm thinking especially the shape of the leaves, which to me are obviously water lilies.  The later illustration retains that familiar leaf shape but adds more detail. But the really interesting ones are the ones that are super accurate.  Here's a strawberry plant: [caption id="" align="alignnone" width="375" caption="page 60"] 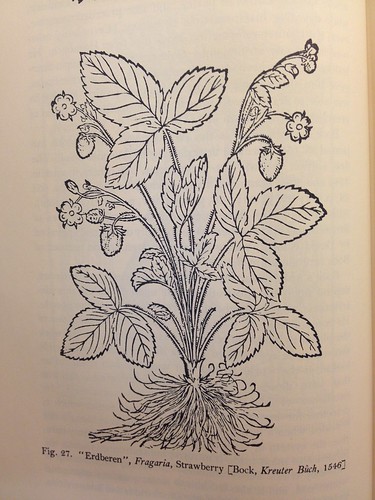 [/caption] It totally looks like a strawberry!  Right down to the fuzzy stems and serrated leaves.  And here's a potato: [caption id="" align="alignnone" width="375" caption="page 158"] 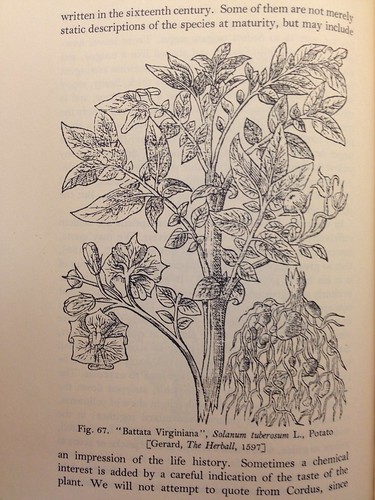 [/caption] I like this one because whoever drew it knew to include both the plant and the roots with the potatoes.  And if you've ever dug potatoes out of the ground you probably know that that's basically what the roots look like.  And of course the flowers and leaves are highly and accurately detailed. Check out this giant iris! [caption id="" align="alignnone" width="375" caption="page 191"] 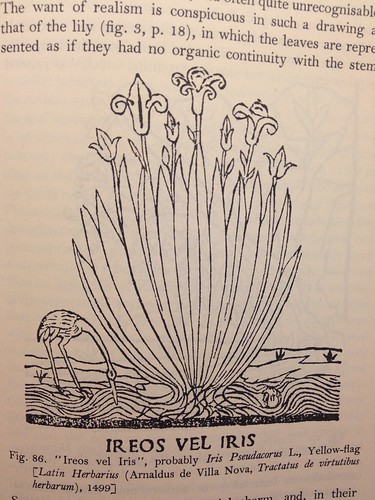 [/caption] It's towering over that bird!  Just kidding.  I assume realism (in size, not details) was not this artist's main concern (as Ms. Arber so delicately puts it, "the want of realism") but the addition of the water bird shows that irises grow in moist areas like riverbeds and ponds.  Pretty smart. The classifications are also interesting, and I couldn't resist including this one: [caption id="" align="alignnone" width="375" caption="page 253"] 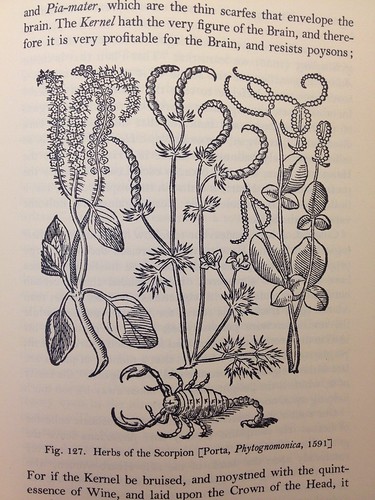 [/caption] These are all grouped together because they are scorpion-like in appearance.  And they really do look like scorpion tails to me.  Not my first thought but maybe this person really liked drawing scorpions and finally had an excuse to draw one. Lastly I'll leave you with one more, and it's one of my favorites: [caption id="" align="alignnone" width="375" caption="page 200"] 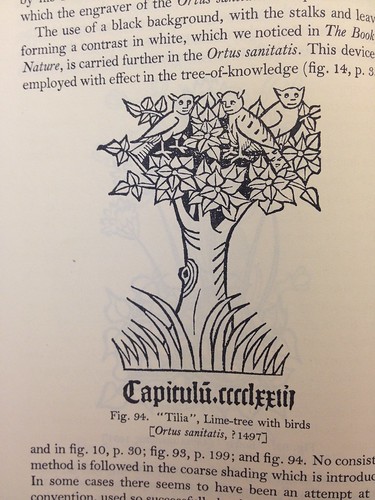 [/caption] I can't really describe this better than Ms. Arber herself:  "The picture of a lime-tree, in which birds of unusual aspect are perching..." (page 201).  Unusual aspect indeed!  She goes on to note that if the leaves, trunk and grass were actually to scale with the man-birds we would lose a lot of important detail.  But I like to think that the man-birds are actually that big.  Terrifying!  Although from their expressions (especially the one in the middle) I have to assume they are very mild-mannered creatures. I hope my little foray into botanical history wasn't too boring.  Hey, at least you got some man-birds out of it. To make sure that I'm not doing anything illegally, here's the full citation for the book, where all these pictures and quotes come from:  Herbals, Their Origin and Evolution:  A Chapter in the History of Botany, 1470-1670 by Agnes Arber, M.A., D.Sc., F.R.S., F.L.S.  Second edition, rewritten and enlarged.  Cambridge University Press, Cambridge, 1953.
Sarah's Garden
Tweet