Last time I touched on the fact that I was, um, struggling with some invasive plants that go by the name of Wild Morning Glory (Convolvulus arvensis), not to be confused with the nice, non-wild Morning Glory (Ipomoea tricolor or Convolvulus tricolor.)  Regular Morning Glory is nice and not invasive at all:  it grows and flowers and then dies and it's gone.  Normal plant stuff.  BUT.  This wild one is different.  Check out the roots on this little one I just pulled up: [caption id="" align="alignnone" width="375"] 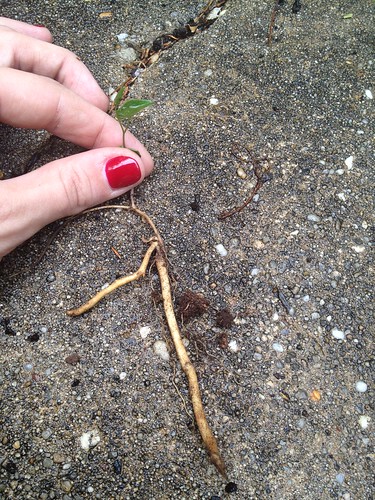 WHAT[/caption] You can see by my handy thumb-scale that the part of the plant that was above the ground was very, very small.  But those roots, especially those two fat ones, are HUGE.  Those fatties are also the ones that release this odd, peppery, skunky smell when you break them, which is always accompanied by much cursing that you broke the root instead of pulling the whole thing out.  At least, uh, in my case.  But you know what?  You can't pull the whole thing out because it grows ANYWHERE.  Case in point: [caption id="" align="alignnone" width="375"] 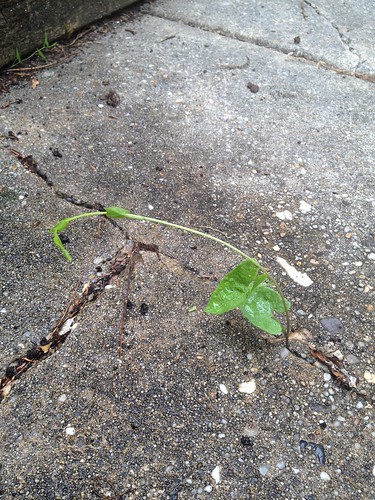 mephisto's nightmare[/caption] That little one is growing through concrete.  Concrete!  There is a tiny crack there and somehow this little thing found its way out through it.  With some quick Googling I found lots of people complaining incredulously that they tried to dig the roots of these devilish things out only to find they went all the way under their houses.  Yikes. The issue isn't that it's an ugly plant; it has nice flowers like Morning Glories and it certainly grows fast which is usually a good thing in my book.  Here it is covering the fence on one side of my yard when I first bought my house: [caption id="" align="alignnone" width="500"] 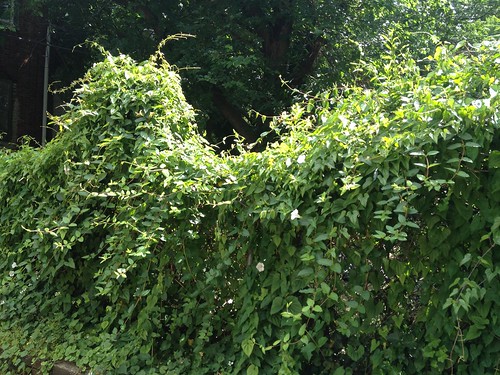 can't even tell there's a fence under there, right?[/caption] So that's cool.  The problem is that it strangles other plants - I had to pull it off the tomatoes and the little Japanese maple that were struggling for their lives.  It will actually choke plants and kill them and  you know what?  That's not very nice.  I normally like vines - ivy and honeysuckle in particular - but those are not so vicious as to actually kill many plants, at least not, you know, overnight.  Seriously, if you let this thing go for more than a couple of days you'll have a big problem on your hands. I'm still committed to getting rid of it without chemicals and I have read a few things that say that if you pull out the top growth repeatedly - like every other day - it will cut off the plant's food production system and maybe in a few years it'll all die.  I kid, but it is actually tough to kill it that way and you have to keep at it, or the parts of the plant that sprout will give the roots enough food to continue living.  It doesn't really help to pull out the roots (although it is extremely satisfying to rip out foot after foot of these horrible, smelly roots) because if you control the top foot or so of the plant you'll kill the food supply, which will in turn kill the rest of the plant.  Apparently the roots can go down 20 feet or more so it is actually pretty futile to try to get them all - basically you never will so you'd better just give up now.  It's a good thing this isn't a metaphor for anything because that would be depressing. After all that, I think we should end on a positive note.  My pepper plants are literally bursting with baby peppers and I have lots of green tomatoes on their way to ripening.  Let's end with this strange and slightly phallic baby Jersey Giant tomato, and I apologize for using the words "phallic" and "baby" in such close proximity: [caption id="" align="alignnone" width="375"] 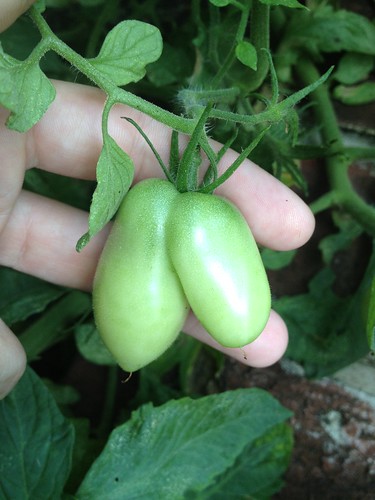 Jersey Giants not yet giant[/caption] So I continue to struggle to control the voracious weed while delighting in my soon-to-be bounty.  Onward and upward, indeed.
Sarah's Garden Gardening and Farming
Tweet