It's true, you know, but luckily planting bulbs is hardly any more work than planting seeds.  I believe it was Beverley Nichols who said (I'm paraphrasing here) that the best way to plant bulbs is to have your friends throw them around your yard and then plant them wherever they land.  I don't have too much yard space for bulb throwing so I planted mine in the already-existing beds. [caption id="" align="alignnone" width="500"] 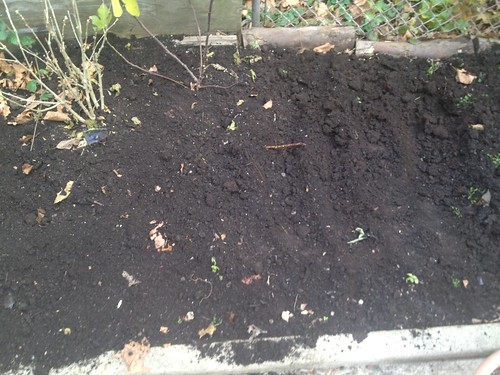 this is an awesome picture of some dirt. just kidding, it's the bed prepped for bulb planting![/caption] I bought a lot of bulbs.  I ordered some (lots) online, forgetting that I had already bought some at the Lansdowne K-Mart back in September.  So now I have quite a variety.  Here's a list of what I planted:  daffodils (all yellow), crocuses, muscari (grape hyacinths), irises, snowflakes, blue squill, starflowers and winter aconite (eranthis.) It didn't really take that long to plant all that, though.  Since I was planting so many, I didn't really worry about rows or anything - just kind of sprinkled them all around and then covered them with dirt.  Did you know that it doesn't matter which way you plant bulbs - they will always turn right-side up as they start growing!  At least I think that's true.  We'll see! [caption id="" align="alignnone" width="500"] 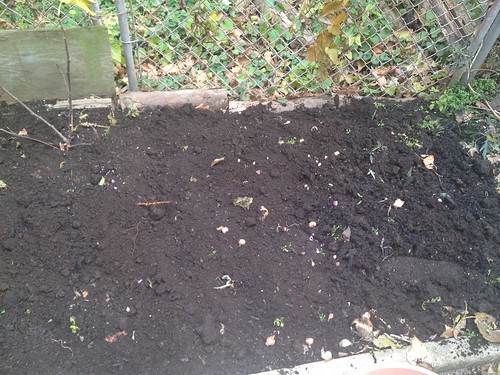 here's some more dirt, this time with bulbs! I know it looks just like the last one; just go with it.[/caption] One big difference between this garden and my old garden is that this one is a lot more open and therefore has a lot more...wildlife.  Of course in a city, wildlife has a slightly different meaning than I'm used to...okay, it's mostly stray cats.  I saw a possum about a block from my house once, too.  But mostly cats and squirrels.  The cats tend to use whatever dirt they can find as a litter box but I'm actually more worried about the squirrels eating my bulbs.  There were like five different squirrels watching me plant my bulbs, probably thinking about what a tasty snack they were about to have.  I asked them nicely not to eat my bulbs but I still have the sneaking suspicion that maybe I was just planting squirrel food.  Some bulbs, like daffodils and crocuses, animals don't eat as much but I know something back there is eating things because something ate all my little carrot seedlings.  ALL of them!  Rude, I say.  Selfish. [caption id="" align="alignnone" width="500"] 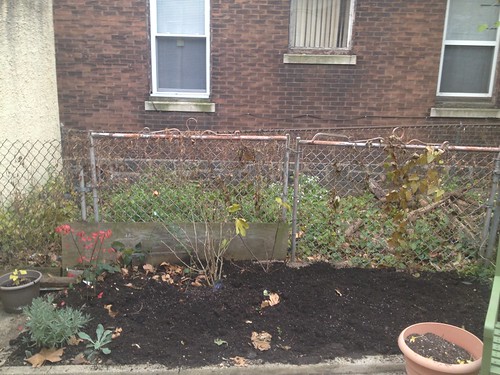 LOOK MORE DIRT[/caption] Okay, I know these three pictures look strikingly similar, but the above one is after everything was planted.  This is, again, a bed that was here when I moved in and I'm planning on changing everything around come spring (or summer or fall) so I'm only planting things here temporarily.  But here you can see some of my other plants.  From the left side of the picture:  a gingko turning yellow for winter, some rosemary and lamb's ear in the front left corner of the bed and a burning bush (burning!), a blackberry and a raspberry, a hibiscus (uh, I think) and the fig I got at the Rittenhouse farmer's market two years ago.  Everything else will (hopefully) be bulbs! [caption id="" align="alignnone" width="500"] 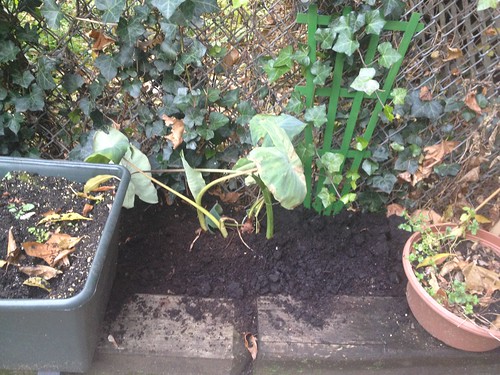 this is also dirt. variation![/caption] Lastly, I planted this elephant ear I got at Greensgrow earlier this summer.  It was never really happy in the pot I transplanted it into after buying it and kind of drooped sadly in my window until I put it outside.  I decided I'd put it in the ground to see if it would make it through the winter.  It already weathered a few frosts outside this year so I may be too late. I'm still getting used to my new backyard - I find it takes at least a full year to fully understand the bright spots, the sheltered spots, the windy spots and things like that.  It'll be interesting to see if these bulbs make it.  I'm ROOTing (get it???) for you, bulbs! Sorry, I'll let myself out.
Sarah's Garden Gardening and Farming
Tweet