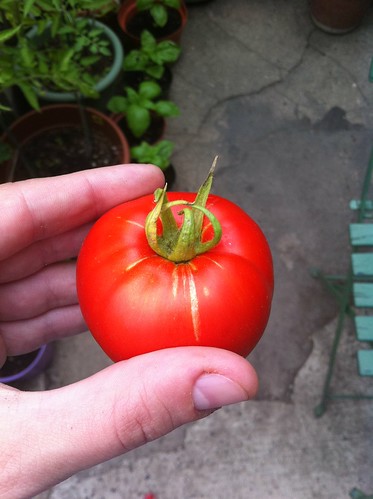 [/caption] Hellos!  This week I picked the first red tomato!  As you can see from the picture, it's pretty small for a beefsteak but I picked it because I noticed that the bottom was getting weird... [caption id="" align="alignnone" width="374" caption="WHAT"] 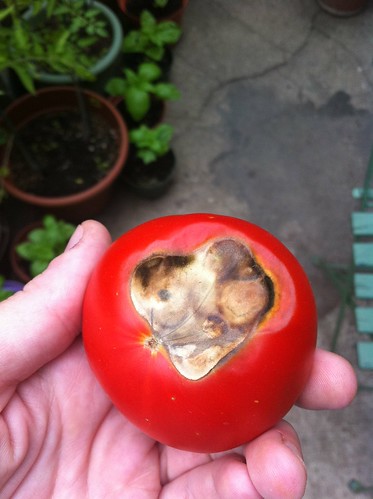 [/caption] A little online research revealed that this is called Blossom End Rot because it occurs at the blossom end of the tomato (opposite the stem end, where the tomato is attached to the plant.)  Here's a look at the cross section: [caption id="" align="alignnone" width="374" caption="next time I'll use a white plate, I promise"] 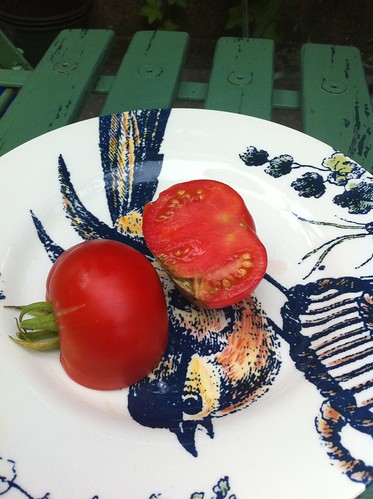 [/caption] From the cross section you can see that I caught this before it got too bad and I was able to just cut off the brown section and eat the rest.  For breakfast.  The good news is that the rest of the tomato tasted just as I remember:  sweet and tangy with that slight acidic bite.  And yes, I cut the tomato in half so I could see the rotted part but then I took big bites out of it like I promised I would. But on to the blossom end rot.  As you can see from the article linked above, blossom end rot is caused by a "calcium deficiency induced by water stress."  At first I was all like "oh no, my soil needs more calcium!" and started researching how to add calcium to soil.  But a lot of things I found claimed that tomatoes don't actually need that much calcium and it is very rare to have calcium-deficient soil.  Especially in my case, since this particular tomato was grown in potting soil with compost...potting soil, unlike dirt in the ground, is formulated to have the correct nutrients and while a calcium deficiency is rare in regular dirt from the ground, it is even rarer in potting soil.  [This goes out to my friend who, when I told him I needed to buy dirt responded with "Why don't you go buy some air, too?"  See?  Potting soil is important.  But I digress...]  The important part of that bolded statement above is the water stress, which means basically uneven watering.  Now I'm trying very hard to water a little bit every day but there are factors beyond my control, namely all that rain we got a few weeks ago and temperatures ranging from super hot and dry to cool and overcast during these past few weeks.  A lot things that I read also said that blossom end rot tends to happen to the first few tomatoes but should clear up once temperatures start evening out in July and August.  Besides the one link above on blossom end rot, which comes from Texas A & M, both Penn State and Ohio State have great agricultural schools with lots of resources on their websites (I am partial to the Penn State HortReport and not only for the rhyming name; here's a particularly good issue on tomato disorders.) [caption id="" align="alignnone" width="500" caption="lots of green"] 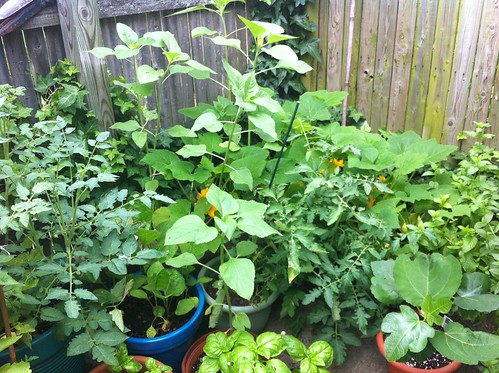 [/caption] On to the rest of the garden!  Above is a picture of a corner of my garden with some of almost every plant I have.  From left to right we have:  tomatoes, sunflowers (the tallest plants, against the fence), eggplant in the bright blue pot, squash against the slightly mossy fence behind the tomatoes with lots of orange squash blossoms, mint and lemon balm on the far right, then a newly-acquired fig in the bottom right corner and in the middle bottom of the picture, basil.  There are obviously lots more tomato (and basil, and eggplant, and squash) plants but this one corner was a pretty good representation of all the plants I have right now.  (It is also a good representation of how crowded things are out there.)  I'm trying to branch out into more flowers - last weekend I bought a little nasturtium for a dollar at a tag sale in West Philly and I got some shady flower seeds (wait, not shady shady like they're gonna pull a knife on you but shade-loving) so I can have some flowers under the tree. That's it for this week.  I have lots of green tomatoes about ready to turn red so I'll update you all on those next week...hopefully they will be rot-free.  I'll leave you with another shot of my basil because I am quite proud of it. [caption id="" align="alignnone" width="374" caption="look at you, growing"] 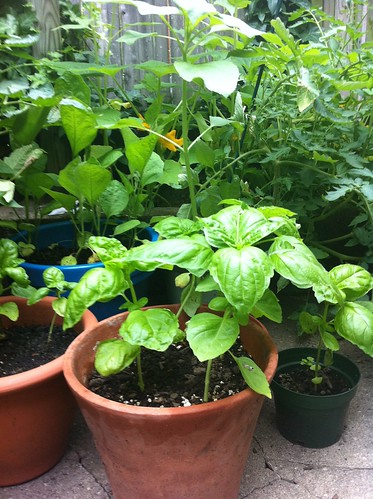 [/caption] Thanks for reading!
Sarah's Garden Gardening and Farming
Tweet