The tomato harvest has started!  Here are some: [caption id="" align="alignnone" width="374" caption="beefsteaks"] 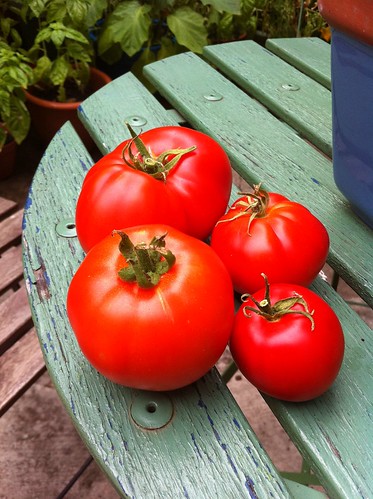 [/caption] None of them are all that large:  here are the two largest in my hand for scale [caption id="" align="alignnone" width="500" caption="hefty!"] 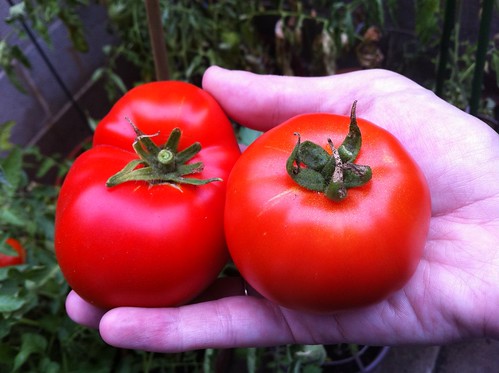 [/caption] These are the two biggest tomatoes I've gotten so far - all the earlier ones were smaller.  I'm not too worried about the size because we all know that fruit grown without chemical fertilizers and pesticides is smaller, right?  Thought so.  And there are more tomatoes coming! [caption id="" align="alignnone" width="500" caption="look at you!"] 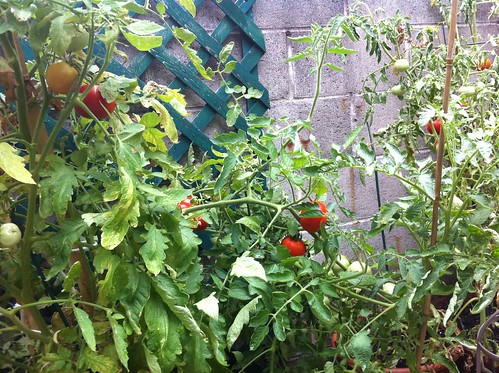 [/caption] I realize that lots of the tomatoes in the above picture look like that perfect shade of tomato red but apparently (one of) the drawbacks of relying solely on the iPhone camera is that it does not pick up colors well.  I've noticed that lighting is really important to making my photos look good (I should say better) and natural light is best, which is why my pictures are always taken outside.  And for some reason a broad spectrum of red gets reduced down to a nice, bright cherry red instead of the nuanced, orangey colors it really is.  So while these tomatoes on the vine may look just as red and delicious as the ones I've already picked, I'm actually leaving them to ripen a bit longer so they can get reach full growth. But!  Not everything is coming up roses.  This little guy, for instance, got pretty dry the other day and is now a bit wrinkly: [caption id="" align="alignnone" width="374" caption="wizened little one"] 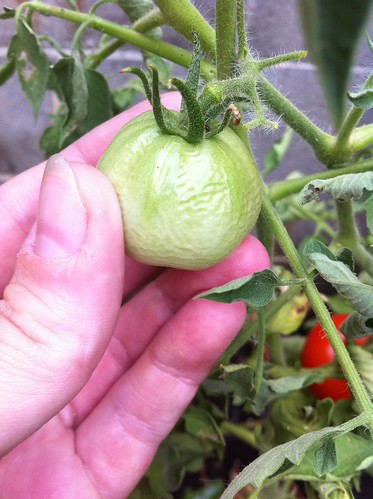 [/caption] so we'll see how that goes.  On the whole, though, the crop looks pretty good - no more blossom end rot or rot of any kind (fingers crossed!) and only a few of them are having issues with the skin splitting.  And I'm still waiting on my Beauty Queens... I know I keep saying this, but I am going to make some changes to the tomato set-up once it is, well, bearable to go out there again and I'm not at work.  In the meantime let's look at some other garden residents.  First up:  sunflowers! [caption id="" align="alignnone" width="500" caption="they are so tall I can no longer photograph the tops, just the underside of the leaves"] 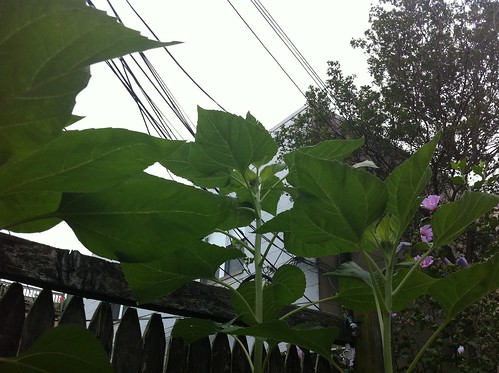 [/caption] You are some tall monsters, sunflowers!  They're probably over 6' now - the raised bed they're in is a little less than a foot tall but they are way taller than me and would be even without that extra foot.  And I'm 5'9"... [caption id="" align="alignnone" width="500" caption="more leaves...for some reason growing something so big so quickly makes me feel like some sort of evil scientist"] 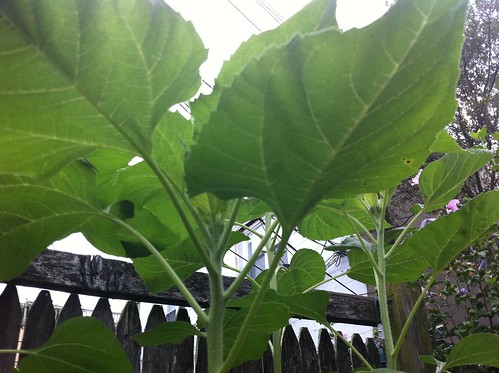 [/caption] And Mr. Fig is also doing well I think: [caption id="" align="alignnone" width="374" caption="somehow when I took this picture I wasn't aware of the blur"] 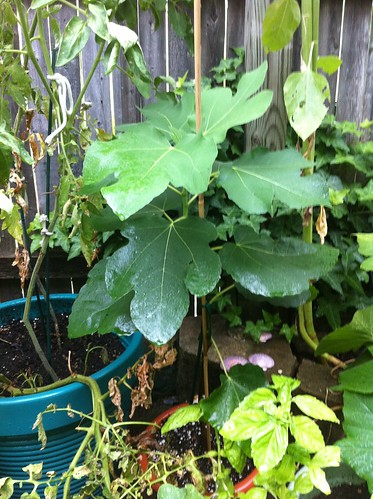 [/caption] I am particularly fond of Mr. Fig because I tried to grow one last year and after surviving the summer I put it in a cooler, dark place (as I was instructed) for the winter and all the leaves fell off.  Which was what they were supposed to do - figs need to be dormant in the winter to produce fruit (or something - I have a long list of meticulously-typed instructions on growing figs from some fig grower in Massachusetts but my eyes start glazing over every time I try to read it) so I didn't water it that often and when I did I felt a little silly because it looked like I had just stuck a dead twig in a pot of dirt and was misguidedly caring for it.  But then!  One day this spring!  When I was dutifully watering it along with many many tomato seedlings, I noticed a bud on the tip of the stem!  Amazing!  So I continued to water and the bud got bigger and greener and looked like it was about to open when...it just stopped growing.  I kept on watering it and even put it outside once all threat of frost was gone but alas the poor thing did not make it.  I thought it was particularly cruel that it started to come back but then apparently gave up.  Come on! [caption id="" align="alignnone" width="374" caption="I call this photo "Fig Part Two" or "Second Chances""] 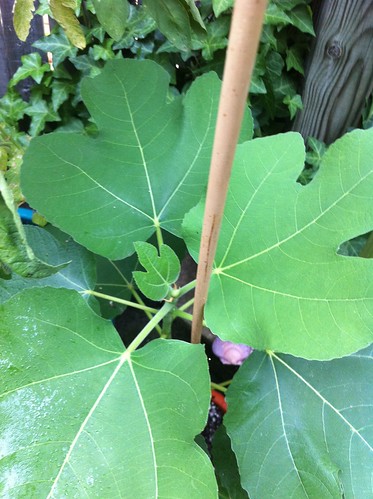 [/caption] Fig #2 seems to be doing better but we'll see.  I even gave it a stake! And lastly, my search for garden kitsch has taken me the seashell route...well maybe it was spending time on the beach.  But regardless, I now have shells! [caption id="" align="alignnone" width="500" caption="These were meticulously plucked from the Atlantic"] 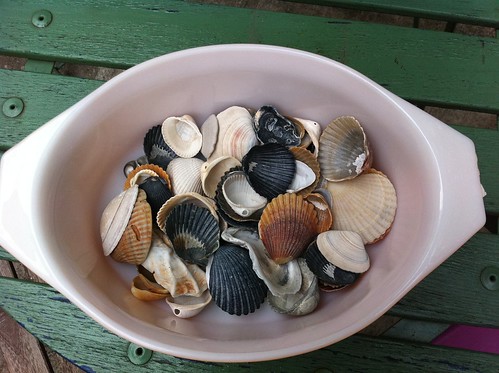 [/caption] Since I don't grow flowers in a bed frame (FLOWER BED, GET IT?) or a toilet or a sink or a tire or have one of those wooden things that looks like a person bent over (surprisingly a Google search of "garden butt" didn't turn up what I was thinking of...) I have to get my creative side out somewhere, right?  Shells all around!  I am also collecting donations of plastic or ceramic animals to live in my little jungle.  I'm sure I won't regret saying that nothing is too tasteless!  And some day I'll get one of those rocks that says "Sarah's Garden"... See you next week, hopefully with a slightly more substantial post!
Sarah's Garden Gardening and Farming
Tweet