Hello!  I found something exciting in my garden this past week, and it wasn't (another) animal skull.  It was far more exciting!  It was... [caption id="" align="alignnone" width="374" caption="can you guess?"] 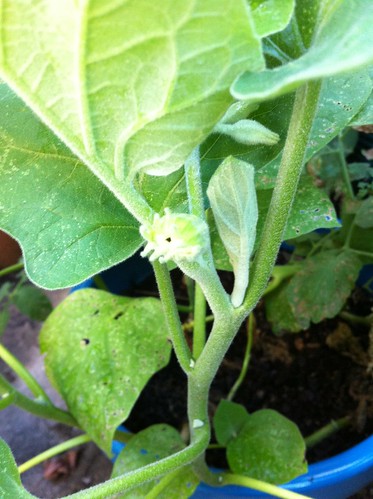 [/caption] That's right, the beginnings of some flowers on my eggplant!  Woo hoo!  These eggplants sure are delicate little things (the variety is Black Beauty for anyone interested) but luckily they like it hot hot hot!  So go, little eggplants, go!  I am so excited to eat you! The other things that have taken off with this massive amount of heat are the sunflowers: [caption id="" align="alignnone" width="374" caption="the weird angle is because they are SO TALL"] 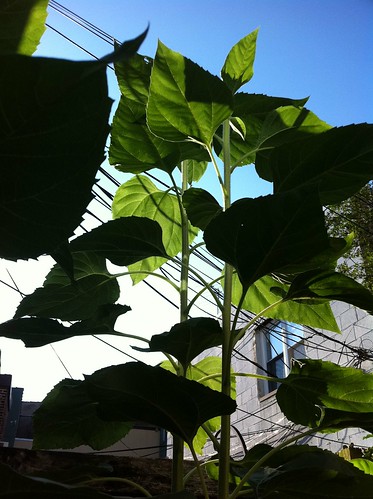 [/caption] Seriously, I guess I should have researched this a bit, but these sunflowers are super tall.  I'm gonna guess they are about 8-9' tall.  When I got these seeds I was all like, I don't want a dwarf variety cause I want TALL sunflowers!  I want them to be really TALL!  Well they are definitely tall so Sarah of a few months ago needn't have worried.  To top it off, this variety is Mammoth Russian which I chose over all the other varieties with things like "giant" and "large" in their name.  "Mammoth" is clearly bigger than "giant," right?  Yeah so the moral of this story is that these sunflowers are really really tall.  So tall, in fact, that it's hard to see the flowers.  But there are totally flowers coming! [caption id="" align="alignnone" width="374" caption="This is one of my favorite pictures for the distinctly South Philly details in the background: tons of telephone wires (why so many? I have no idea) and vinyl siding."] 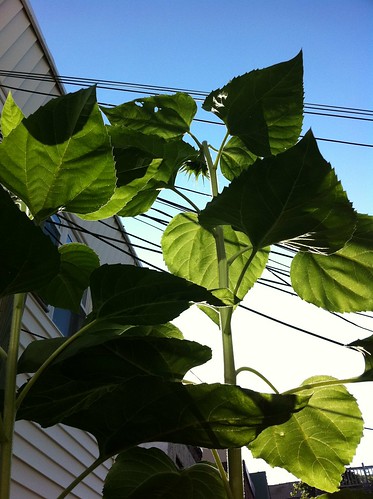 [/caption] See the flower starting in the middle of the picture?  Yes, sunflowers, yes!  Even though you're towering over the rest of the garden!  I guess I'm lucky we have a nice big window on the second floor overlooking the garden because that's pretty much the only way to get a nice view of the sunflowers.  Unfortunately (or not?) that window is in the bathroom.  Hey a nice view is a nice view, right?  I can't complain.  Next year, however, I might not be so aghast at the idea of a dwarf variety... So although that recent heat wave was pretty unbearable for me apparently it did wonders for some of my slower-moving plants.  Keep it up, plants!  I'm rooting (pun intended) for you! Sarah DeGiorgis has lived in Philly for five years and is finally starting to feel like a true Philadelphian, though she still detests cheesesteaks.  She enjoys reading, watching bad tv, eating and cooking good food and digging in the dirt. Catch up with her continuing efforts to grow food in South Philly by clicking here.
Sarah's Garden Gardening and Farming
Tweet