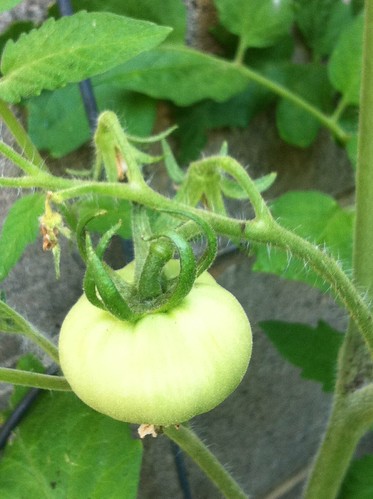 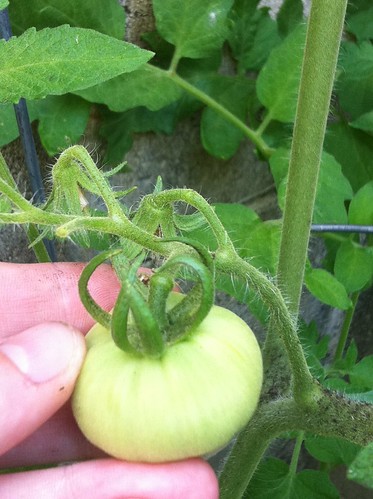 [/caption] but that's okay.  It's from the first flowers; actually, these here: 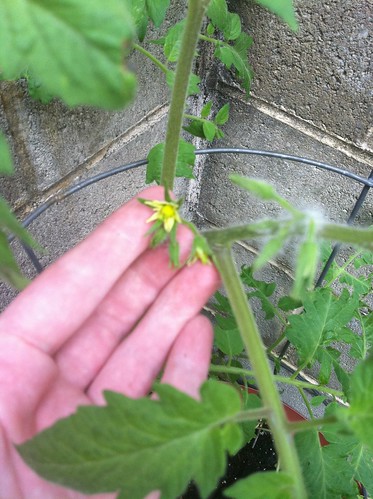 that I wrote about two weeks ago.  Neat!  They're on the biggest beefsteak plant which is over 5' tall.  It's the one in the corner that's, well, the tallest. [caption id="" align="alignnone" width="500" caption="It can peek over the wall now!"] 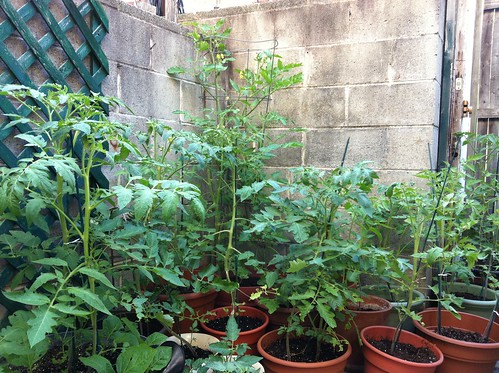 [/caption] So yeah, that wall's about 5' tall, maybe a little taller.  I must say, I wasn't expecting such tall plants but hey, I'm not complaining.  They smell GREAT - just like fresh tomatoes.  And the stalks are really thick!  Here is one, not the plant with all the tomatoes, but another beefsteak: [caption id="" align="alignnone" width="374" caption="Strong"] 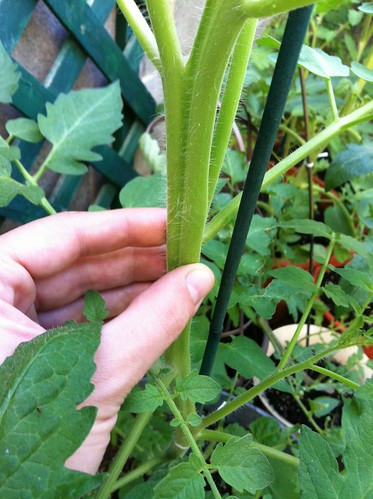 [/caption] Now I need to admit something.  When I moved all the tomatoes outside, I didn't bother to label which were beefsteaks and which were beauty queens (a smaller - thank god - heirloom variety) because I was all like "I know all these plants as intimately as my [non-existent] children, of course I will be able to tell which is which!  Pshaw, I don't need labels."  Well maybe I didn't think exactly that, but I definitely figured that I would be able to tell the plants apart at the very least by where I placed each pot.  There's only so much room, ya know?  Well, that was a month ago; since then I've moved the pots around so much trying to get them all enough sun and water that beyond the 4 or 5 biggest beefsteaks and two pots that I remember are beauty queens, I actually can't tell the rest apart.  So:  label your plants even if you are sure you'll remember! But hey, I do have other plants besides tomatoes.  Here's one of the eggplant, with a weird shot of my hand and arm that was supposed to be for scale but kind of just looks weird: [caption id="" align="alignnone" width="500" caption="Sorry for the weird glowing arm"] 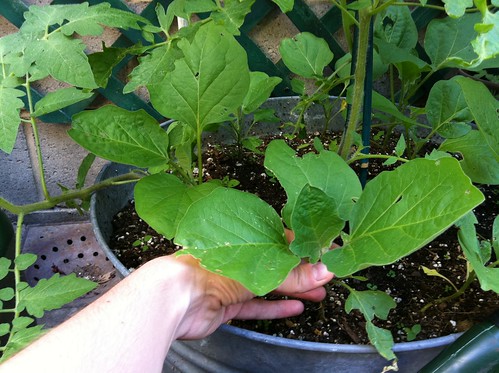 [/caption] I heard and read that eggplants are really picky and hard to grow and compared to everything else I've planted I'd say that is definitely true.  They apparently need very warm soil to actually grow, which is why they didn't do much the first few weeks I had them outside.  I had to take them inside or cover them outside because apparently temperatures under 50 degrees can kill them.  This black container is all eggplant: [caption id="" align="alignnone" width="500" caption="Little ones"] 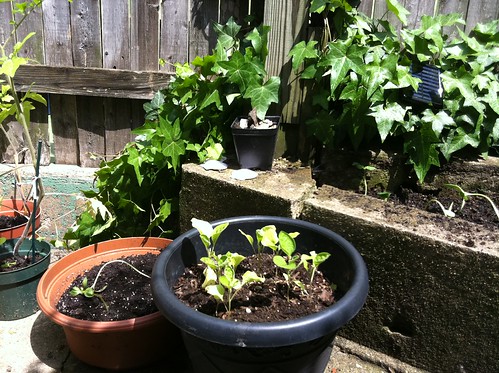 [/caption] and, even though I took that about a week ago, that's pretty much what they still look like.  The ones in the bigger containers are definitely doing better (or at least are bigger) so this weekend I'm going to repot the smaller eggplants in much larger pots to give their roots lots of room.  Hopefully I won't kill them.  Fingers crossed. I am really impressed with how fast the sunflowers and squash are growing.  Here's the squash now large enough to hold its own (hopefully) against the mint: [caption id="" align="alignnone" width="500" caption="Dwarfing the lavender now!"] 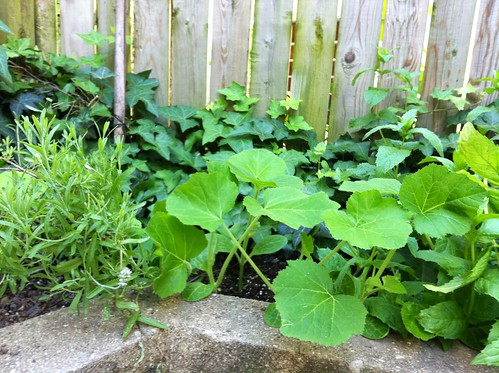 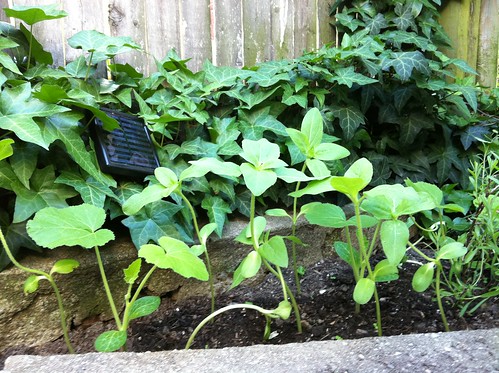 [/caption] I like that with the squash you can still see the two original leaves at the bottom of each stem.  Hopefully the sunflowers will be tall enough that the squash can grow on the ground around them and they can both live in harmony. That's right, my garden will be harmonious. This weekend the plan is to move things in smaller pots to larger ones so that I don't freak out as much when I can't get home to water them and it's 95 degrees and sunny.  Right now I'm watering everything twice a day since it's been so hot and the smallest pots are still completely dry by the afternoon.  That said, they survived the hot Memorial Day weekend with only being watered Friday afternoon, Sunday and Monday night when I got home and everything was fine.  I am thankful for my raised bed, though, since it takes a while for that to dry out and the roots can go nice and deep. I'm leaving you with a picture of the second tomato, which is so cute I couldn't help but take a picture of it. [caption id="" align="alignnone" width="374" caption="I think it looks like it's wearing a hat"] 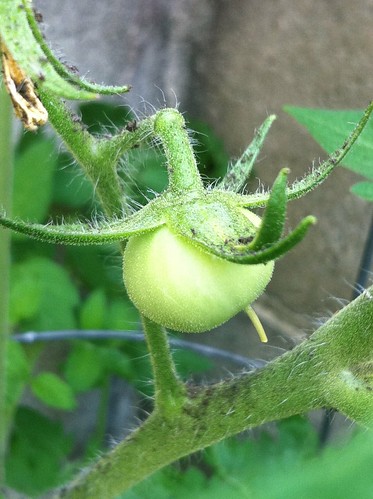 [/caption] See you next week! Sarah DeGiorgis has lived in Philly for five years and is finally starting to feel like a true Philadelphian, though she still detests cheesesteaks.  She enjoys reading, watching bad tv, eating and cooking good food and digging in the dirt. Catch up with her continuing efforts to grow food in South Philly by clicking here.
Sarah's Garden Gardening and Farming
Tweet