Hello!  I thought that since we got that surprise snow that things would be pretty dead out in the garden.  But there's still lots of these: [caption id="" align="alignnone" width="500" caption="Green"] 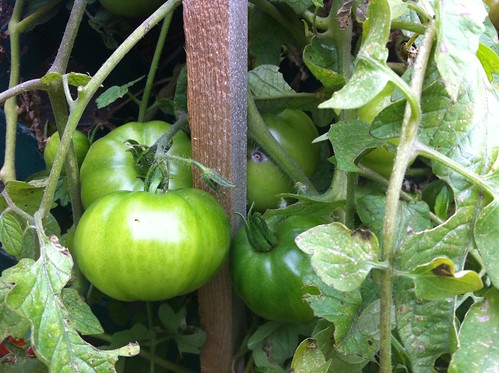 [/caption] I think I've already documented here that I am not the biggest fan of green tomatoes.  I would really, really like to like them but they are just too hard and sour.  But I may try dredging a few in cornmeal and frying them to see how it goes.  I think the secret to good fried green tomatoes is a good remoulade... [caption id="" align="alignnone" width="500" caption="Ignore that tomato in the upper left-hand corner..."] 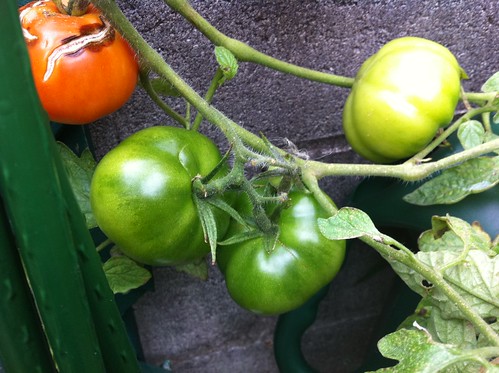 [/caption] Of course, there are lots of other things to do with green tomatoes.  Like pickling!  I love pretty much all pickles but I don't quite trust myself on the canning front yet.  That's moving a little too far into domesticity for me.  Maybe next year. [caption id="" align="alignnone" width="500" caption="Little Beauty Queen"] 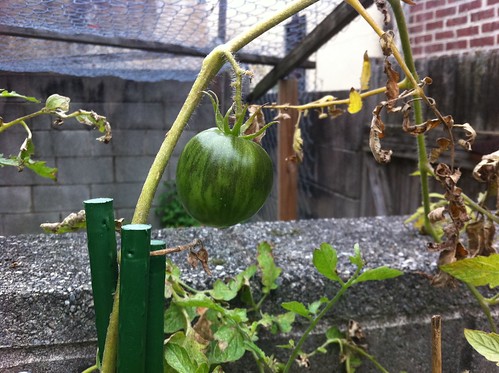 [/caption] What I'll likely do with most of these is try to ripen them inside.  I've experimented with this a little and here's the method that seems to work best for me: When you pick the tomatoes, be sure to leave some of the stem or vine attached.  I read somewhere to do this (I'm not sure on the reasoning) but it seems to help. If you only have a few tomatoes you can just put them all in a paper bag and set it in a darkish place.  You don't want to seal it completely but you do want to fold the bag closed or something to keep all those gases that ripen the tomato in.  Just check on your tomatoes every day or so to make sure they don't rot. If you have lots of tomatoes you can wrap each one loosely in newspaper and set them all in a box or something and put that in a dark place. Anyone have any luck with ripening tomatoes inside?  Any tips?  I'll let you know how my ripening experiment turns out next week! Sarah DeGiorgis has lived in Philly for five years and is finally starting to feel like a true Philadelphian, though she still detests cheesesteaks.  She enjoys reading, watching bad tv, eating and cooking good food and digging in the dirt. Catch up with her continuing efforts to grow food in South Philly by clicking here.
Sarah's Garden Gardening and Farming
Tweet