Happy 2012!  Now that it seems that winter has finally arrived I am looking for ways to add some life and color to my little empty (of plants) back yard.  Luckily I have the ivy left over from a previous tenant growing around the tree and up the back fence to at least provide some green during the winter.  But I want color!  If I can't surround myself with millions of tomato plants (slight exaggeration) then I at least want something to brighten it up out there a bit. I know there are lots of plants that can handle winter outside but the majority are green (hello, evergreens) and while I love the color green with all my heart I just need something a little brighter in these dark months*.  Enter:  witch hazel! [caption id="" align="alignnone" width="500" caption="picture via flickr"] 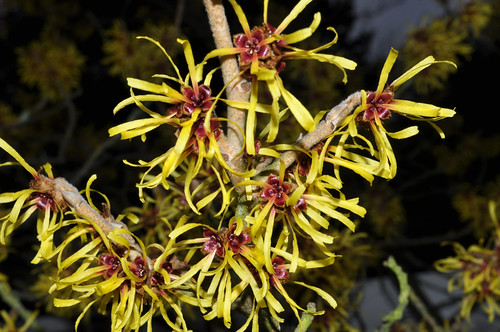 [/caption] Witch hazel is pretty cool.  It has leaves, but like other deciduous plants they fall off in the winter.  Then the bare branches produce yellow (or orange or red) flowers, meaning that they flower when every other deciduous plant just looks dead.  Plus they're bright and weird-looking which is instantly a plus in my book. There are different kinds of witch hazel, all in the genus hamamelis.  My knowledge of witch hazel is not that extensive but there are varieties of the plant that have originated in the United States, Japan and China.  This one is hamamelis virginiana, one of the species that originated in the US: [caption id="" align="alignnone" width="500" caption="this photo is also from flickr!"] 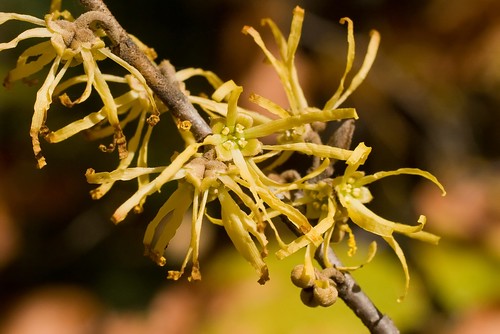 [/caption] Anyway, I'm not showing you my own photos because, well, I don't have any witch hazel.  Yet.  I'd like to plan a trip to this nursery in New Jersey because they have lots of different witch hazel cultivars. I don't see too much witch hazel around Philly but it grows wild in the woods.  I remember seeing some in the Wissahickon one February or March a few years back.  Something about those bright, weird flowers really gets me.  Someday -- someday! -- I'll have a witch hazel to call my own. *This is how dedicated I am to the color green:  Once, about 6 or 7 years ago, I was flying back to college and was at a newsstand looking for trashy magazines to read on the flight.  One fashion magazine caught my eye (I think it was InStyle?) because it was the "green issue."  Now this was before the word "green" became synonymous with "eco-friendly" so I eagerly grabbed the magazine, imagining pages upon pages of green clothes.  This is a fashion magazine, right?  Well, yeah - imagine my disappointment when I opened it up on the plane and found that it was in fact about recycling and there were absolutely zero pictures of green clothing.
Sarah's Garden Gardening and Farming
Tweet