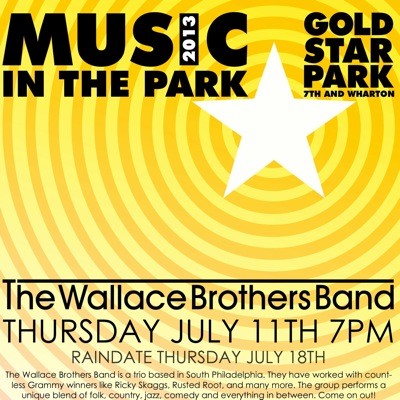 On Thursday, July 11th (raindate Thursday, July 18th) the Friends of Gold Star Park in association with the Passyunk Square Civic Association, the Philadelphia Department of Parks and Recreation AND the South Philly Food Co-op present the second of three Music in the Park Concerts. Thursday's show will feature The Wallace Brothers Band and will start at 7 pm.

The Wallace Brothers Band are trio based in South Philadelphia. The group has worked with Grammy winners Ricky Skaggs and David Bromberg, as well as Robert Hunter of The Grateful Dead, Rusted Root, WEEN, Frog Holler, Dicky Bettes of The Allman Brothers, and many more. Also, Lucky, their pedal steel player just got off the road with Shania Twain, so the band is glad to have him back. The group performs a unique blend of folk, country, jazz, comedy and everything in between.

As part of the entertainment for the younger attendees, the Co-op will reprise a fan favorite from an earlier event - “Mystery Boxes” where kids can place their hand in a box and guess what food is inside. This event is a great opportunity to spend some time on a nice summer evening with friends, neighbors and fellow Co-op members. We encourage any member who is attending to invite along some non-member friends to learn more about the Co-op from our representatives (who will also be able to sign people up on the spot!). The summer growing season continues. How many new members can we count on this week!?
Events
Tweet