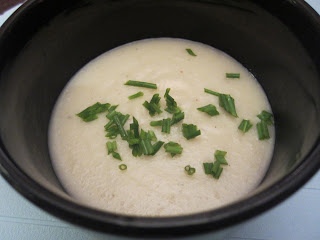 I've been traveling for work, and staring at hotel carpeting. I don't do a ton of traveling but this past month or so has been exhausting. I spent more time elsewhere than I did here. So I've seen an array of conference center rugs*, but I haven't seen my kitchen. Which means I haven't been cooking, because you know, I've been elsewhere, and that I came home and had no idea what was in the fridge or freezer. So I had to do a serious overhaul/cleanout/accounting for what's what like I did a while back. The magical part of doing that was finding soup in my freezer. Chicken soup and butternut squash soup and potato cauliflower soup. Finding soup in the freezer isn't like finding frozen tofu or leftover pasta sauce. With soup, you're already there. It's dinner. Before I left, I had made up a lot of potato cauliflower soup. I don't find a lot of use for potatoes, and potato soup has a guilt-laden heaviness to it that stems from the clear association between potatoes and saddlebags--an association often forgiven in the face of french fries. 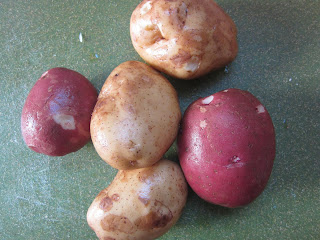 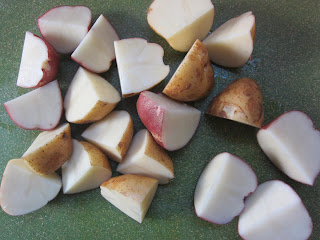 I started with five medium-smallish potatoes, but use what you have. This is so flexible, just adjust your liquid and your spices to accomodate what you have on hand. My potatoes are whatever thin-skinned varieties are grown locally. You could peel them in advance, but I just took the skins off by hand after they had boiled. This requires either patience or asbestos-fingers like I have. I can touch hot things and get away with it. 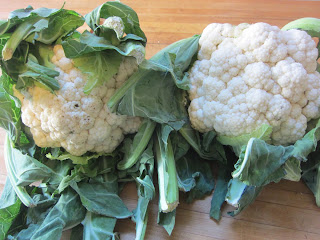 I also had two medium-ish heads of cauliflower, so this is as much cauliflower as potato. I set my quartered potatoes in a pot of water to soften (imagine you're making mashed potatoes) and laid out my cauliflower florets with some garlic (4 cloves) and onion (half a medium white one) on a baking sheet. 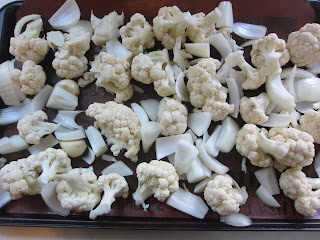 I hit the veggies with a spritz of olive oil and a dash of salt and pepper, and set them in a 400 degree oven to soften for 30 minutes. 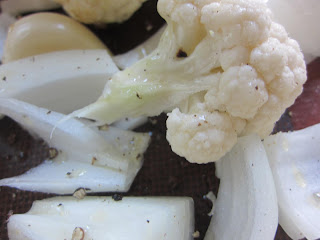 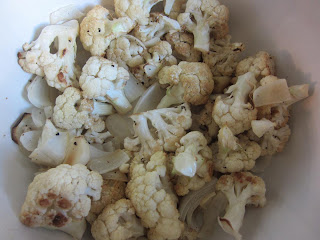 Once my potatoes were fork-tender (25 minutes?) I took them out and peeled them by hand. 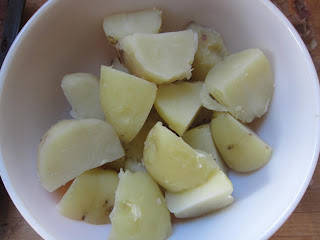 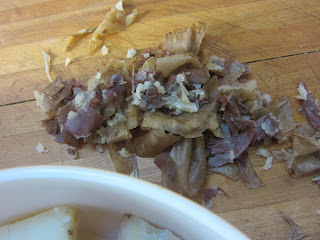 Taters, cauliflower, onions and garlic all went into a pot with enough vegetable stock to just about cover them, and simmered for just a couple of minutes - you want your cauliflower to be tender enough to blend. 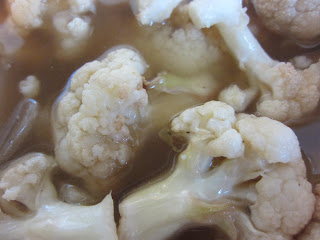 I used my emulsion blender (but you can use a standard blender, carefully) to blend it until it was soup, adding more stock as needed. I got up to three cups of stock, but this is going to vary based on what you start with and the texture you're after. 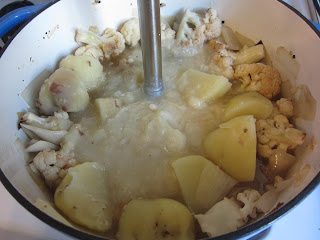 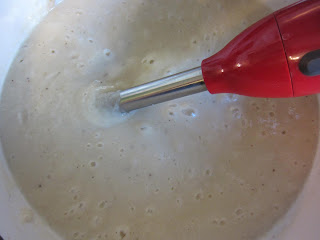 Season to taste. I added more salt and pepper at this point. And then it's all about customization. Right now, I have a lovely vegan soup. 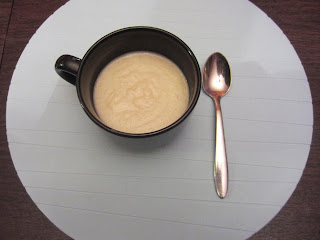 Add chives if you have them, or scallions.

If you're doing dairy, add some shredded cheddar. 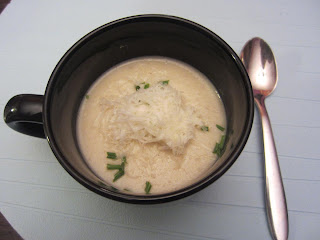 And/or maybe some sour cream. 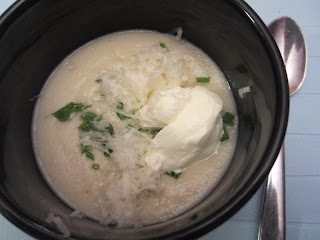 Or go all out and add some bacon. Either way, it's rich and creamy and satisfying. 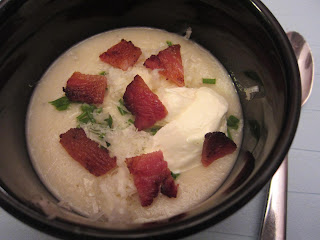 This recipe is cross-posted at Saturday’s Mouse, where I’m working on making food out of food.

*See this post on SaturdaysMouse.com for full analysis of conference center carpets. **Cauliflower does plenty of things well.   Potato Cauliflower Soup The rich goodness of potato soup with fewer calories and some extra vitamins. Ignore all of that and it's still warm and creamy and comforting.  Ingredients Instructions Boil potatoes (peel first if that's easier for you) until fork tender.Roast cauliflower, onion and garlic for half an hour or so at 400 until tender, with some oil and salt and pepper. Add potatoes, cauliflower, onion and garlic to a large pot and add vegetable stock until just about covered. Simmer until soft enough to blend. Blend. Add stock as needed. Season to taste and serve. OPTIONAL: Top with chives or scallions, cheese, sour cream or bacon.  Details Prep time: 5 mins Cook time: 40 mins Total time: 45 mins Yield: 8-10 servings
Recipes
Tweet