First of all, thanks to everyone who came to the container gardening workshop this past Sunday!  It was fun and hopefully informative and we planted some seeds.  My little sunflowers are juuuuuust starting to sprout in my front window: [caption id="" align="alignnone" width="500" caption="babies"] 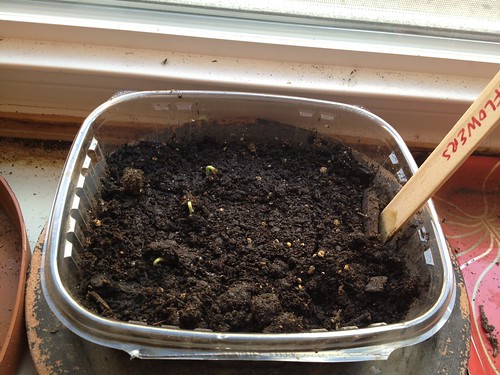 [/caption] These sunflowers sprout very quickly so don't be worried if none of your seeds have sprouted yet.  In general seeds tend to sprout in 7-10 days, depending on the seeds.  Just be sure to keep the soil moist and put them in a place with light once you see the first sprouts, since they need the sun. I've finally moved all of my plants outside for the summer and they are so much happier (yes, they told me.)  Just remember that it's quite a transition for them going from inside, where the temperature stays relatively stable all the time and the sun isn't very strong, to outside, where the temperature fluctuates wildly and there is wind and rain and lots of strong sun.  My seedlings I put out in the sun right away since they need all the sun they can get.  But if you have a plant that was not getting lots of sun over the winter you'll want to start it off in a somewhat shaded spot outside.  Then you can move it to a sunnier spot and it won't be too shocked by the transition.  Here's one of my figs that I put out in the sun for its portrait but will be staying in the shade of the tree for a few more days before it goes to full sun: [caption id="" align="alignnone" width="375" caption="portrait of a fig"] 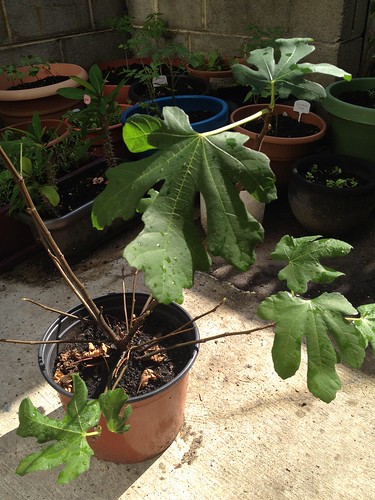 [/caption] This fig (from the Rittenhouse Square farmer's market last summer) has always been the strongest of my two figs and I'm not showing you the other fig because it has all of two leaves on it.  This one, though, in addition to all the leaves also has buds at the end of each branch.  It's crazy how two plants of the same species (different cultivars though) can behave like two totally different plants:  one I have to baby and watch closely and this one just keeps on going.  I'll repot this one soon because it's getting a little big and looks like it needs more room to grow. [caption id="" align="alignnone" width="375" caption="thyme!"] 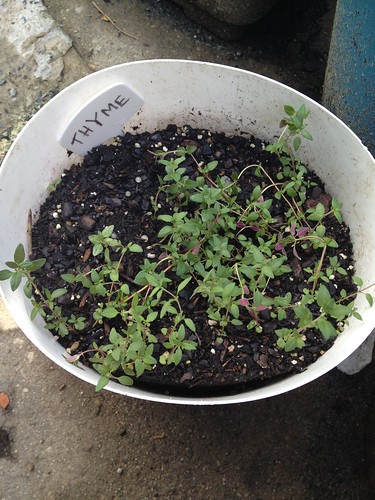 [/caption] I'm sharing this picture of my thyme because it's embarrassing how many times I've gone to the grocery store and bought a little thyme plant to use in one recipe and then let it die by forgetting about it (same goes for basil and rosemary.)  I keep reading that it's not worth it to grow herbs from seed since they're so readily available but I loved all my basil last year and this thyme hopefully I'll be able to keep alive.  It's really simple - there's not even any repotting needed for this thyme because I planted the seeds in a fairly big pot.  The basil I will have to eventually repot but that's pretty easy, too.  I've just learned that if I take the time to start things from seed I won't forget about them; if I just buy a little plant I will almost definitely forget about it and then feel like a monster for killing it. I still do have some stuff inside, mostly because I've run out of pots for transplanting.  Here are my peppers, which I'm growing mostly for pest control but maybe they will be delicious and change my stance on peppers, which right now is that I'll eat them if they're in something but I'd rather avoid them.  These are little yellow stuffing peppers: [caption id="" align="alignnone" width="375" caption="peppers"] 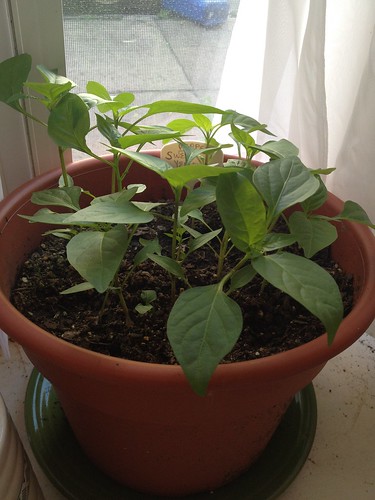 [/caption] And here are some more tomatoes; these are Jersey Giant which is another kind of Beefsteak: [caption id="" align="alignnone" width="375" caption="ignore the cracked pot, please"] 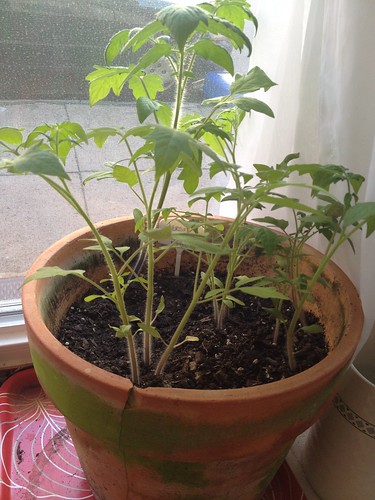 [/caption] It's high time these little giants (HA) got repotted.  You don't want to let them go too long since the roots will get crazy and all tangled in each other and it won't be pretty.  Of course you can also avoid this by using actual seed starting trays with a separate spot for each seed but really, that would be far too easy.  Also I don't feel the need to buy things just for starting seeds when I've done well enough just starting them in my many containers that would otherwise sit empty and take up precious space. I'll leave you with a shot of my chives, which would look awesome in one of those planters shaped like a head because look  how hair-like it looks: [caption id="" align="alignnone" width="375" caption="hair-like chives...appetizing!"] 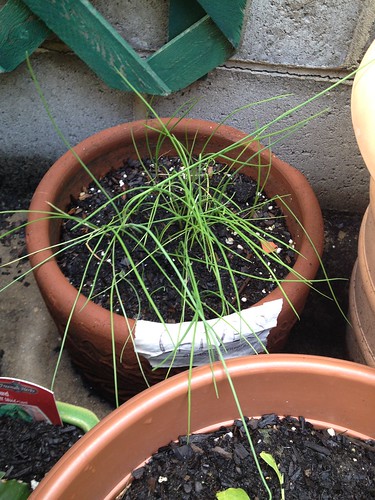