I realized the other day that all the vegetables I planted in the bathtub were, to my surprise, doing quite well.  So I thought I'd take a quick look back at the month-ish long progression of the bathtub plants. Here they are on July 19th.  Such sad, sad plants!  They had been suffering in pots on a porch that was not very sunny.  Poor guys. [caption id="" align="alignnone" width="500"] 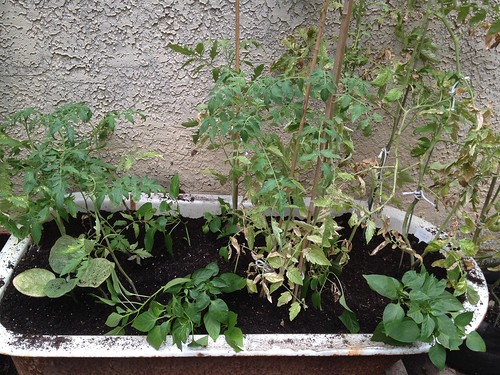 eggplant, tomatoes and peppers[/caption] On July 26th they didn't look much better but you can see the eggplant in the left-hand corner of the tub has nice new green leaves: [caption id="" align="alignnone" width="500"] 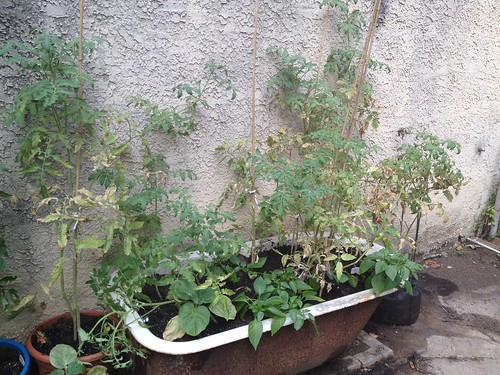 still pretty yellow[/caption] Somewhere along the line they must have decided they liked the tub so by August 4th they were looking fuller and needed more staking: [caption id="" align="alignnone" width="500"] 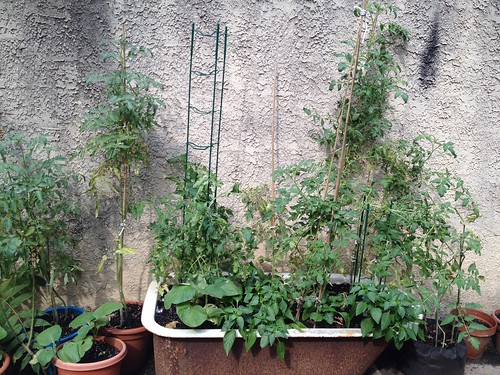 much more green![/caption] And then, well, things got crazy with my house and we had lots of rain and before I knew it the tub was bursting with vegetable plants!  They look healthy!  This is August 21st: [caption id="" align="alignnone" width="500"] 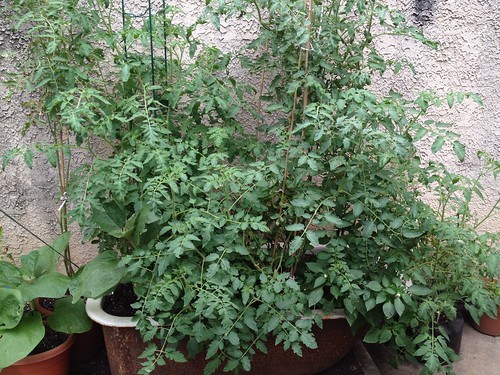 tomatoes always take over, but the eggplant and peppers are holding their own[/caption] As usual, the tomatoes have engulfed all their stakes and have blooms but not too many tomatoes.  I did eat a yellow copia that was sweet and delicious but unfortunately I failed to photograph it.  Here is some photographic evidence that the peppers are growing, though: [caption id="" align="alignnone" width="500"] 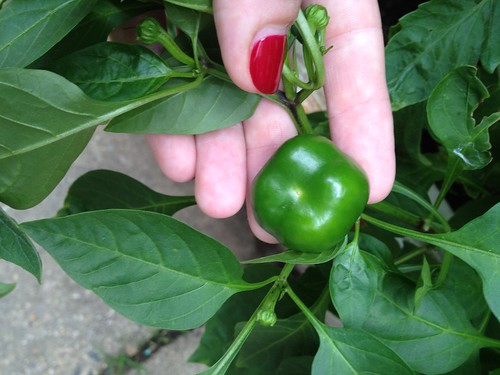 pepper![/caption] My unscientific explanation for why there are no tomatoes yet is that the tomato plants themselves have to grow bigger (which they can now since they have lots more dirt to grow in) before they start producing tomatoes.  I've been trying to break off the suckers when I see them - to tell the plants that it's time to start producing fruit instead of just continuing to grow - but they grow so fast now that I miss lots of them if I'm not out there every day.  But as long as we get no freak September snowstorms I'm fine with harvesting early fall tomatoes.  Last year I was still getting tomatoes into December so right now I'm in no rush. And just a reminder that the Second Annual South Philly Garden Tour is coming up on September 8th!  I speak from experience when I say the last one was loads of fun.  You can read my thoughts on last year's tour here.    Now go get your tickets!  It really is amazing to see what people can grow in small city spaces.
Sarah's Garden Gardening and Farming
Tweet