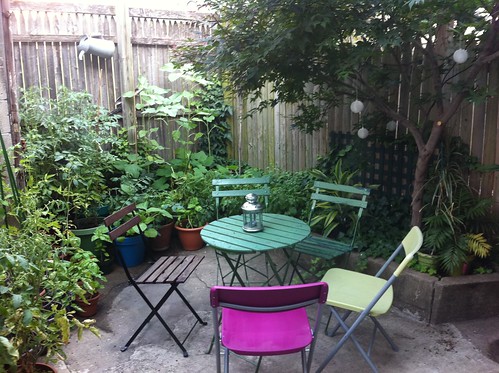 [/caption] This morning, some women from the Pennsylvania Horticultural Society came to judge my garden for the City Gardens contest!  We had a nice time sitting outside discussing plants and they even gave me some tips for my two tomato plants that are not doing as well. Other than that, I am watching tomatoes turn red, like the little guy in the picture below. [caption id="" align="alignnone" width="374" caption="Beefsteak #2 will hopefully be rot-free"] 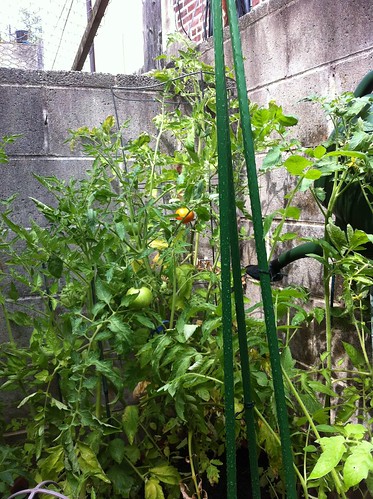 [/caption] And my Beauty Queen tomatoes are finally showing some progress!  Here is the tallest: [caption id="" align="alignnone" width="374" caption="the one tied to the green stakes, kind of hard to see since everything is green (the best color)"] 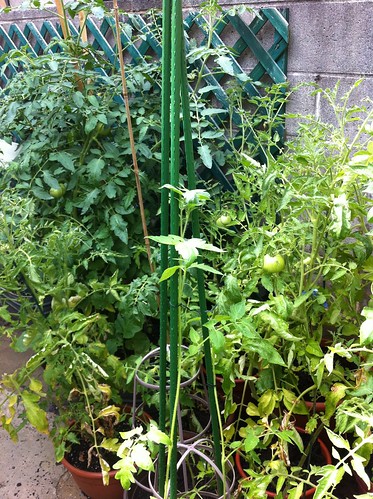 [/caption] This little monkey is about 4' tall!  I think that this counts as a "leggy" plant since there aren't too many leaves and branches, just that one main stem.  Unless I have no idea what "leggy" means in terms of plants, which is also entirely possible.  But I think that these little ones kind of got lost in the beefsteak forest behind and around them and had to struggle to get enough sun.  I've since moved things around to try to give some of the smaller monkeys more sun and give all the plants a slightly different view and neighbors.  Obviously this is important.  But seriously, I like having things in pots so that I can do that and then I notice things like little weeds to pluck out and dead leaves to clean up and things that I wouldn't notice just from looking at all the plants from one angle. [caption id="" align="alignnone" width="374" caption="containers"] 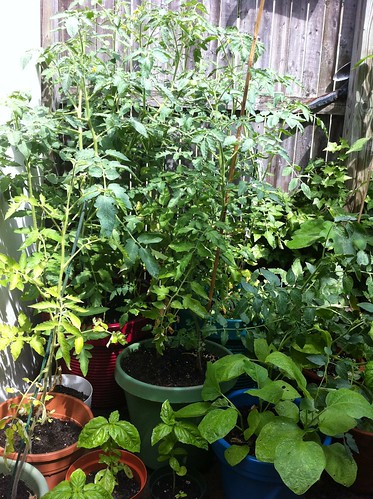 [/caption] I've been thinking about this container thing a lot lately.  On the one hand, I like the challenge of growing things in containers and now I have a pretty good grasp of when plants are getting too big for their containers because they don't grow as quickly and dry out very fast.  But it would be so much easier if I could just put all these things in the ground!  In the picture above, the blue pot in the lower right-hand corner is a variety of eggplant called Black Beauty.  Those are pretty good-sized leaves, but there is nothing close to a flower on any of those eggplants.  By contrast I have a friend who has the same variety of eggplant but hers is a few feet taller, filled with lovely purple blooms, and she even has actual eggplant!  That she ate!  (Am I jealous?  Never!)  Anyway, the reason my friend's plant is so much larger than mine is that hers is in the ground and has no container restraining it so it can grow and grow to its heart's content.  Also, plants will overwinter in the ground since a small quantity of dirt in a pot will freeze much faster than the ground does.  All this rambling is just to say that I think I would like a mix:  pots for smaller plants and beds for larger things, like, ahem, tomatoes. [caption id="" align="alignnone" width="374" caption="nasturtiums"] 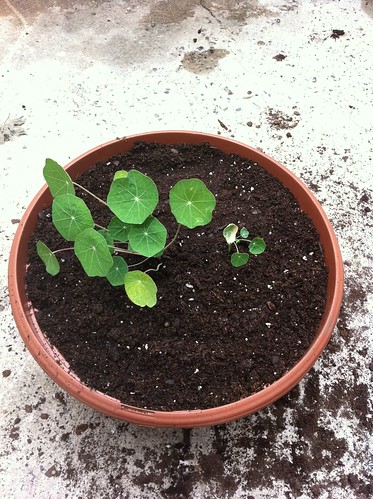 [/caption] These are the nasturtiums I got in West Philly a few weeks ago.  I have somehow turned into the type of person who buys plants everywhere she goes and then carries them around the city like a crazy person (note:  if you don't necessarily like strangers talking to you you should probably restrain from carrying plants around the city and on public transportation.  Take it from someone who knows.)  I never thought I would grow, let alone buy for a dollar, a nasturtium in my life.  My parents had them when I was growing up and once, upon learning that you could eat the flowers, I stuffed a whole red flower into my mouth and thought it was just about the foulest thing I'd ever tasted.  The taste is so strong and peppery that I could taste it for hours after and for years even the smell of nasturtiums used to make my stomach turn.  But looking out at my garden the other day I decided I needed more flowers and nasturtiums, besides being good companion plants for tomatoes, also love hot, full sun.  And they are bright and cheery!  So I willingly purchased a plant that I vowed as a little girl to never go near again.  Getting older is weird. [caption id="" align="alignnone" width="374" caption="squash"] 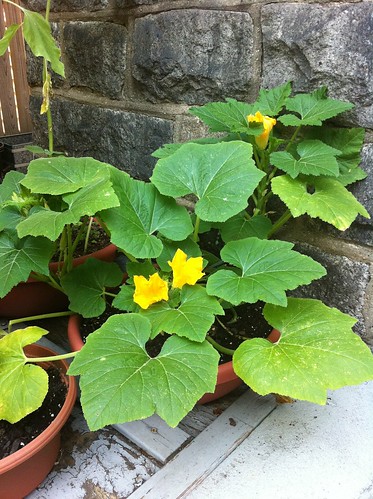 [/caption] Here are some squash blossoms.  I'm sorry for all the squash blossom pictures but they are just so bright and happy-looking.  And here are lots and lots of tomatoes: [caption id="" align="alignnone" width="500" caption="so many"] 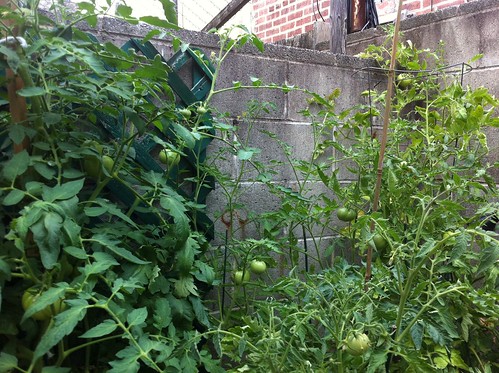 [/caption] I'm looking forward to these guys all turning red.  Tomato harvest!  Friends, get ready to help me eat these! Sarah DeGiorgis has lived in Philly for five years and is finally starting to feel like a true Philadelphian, though she still detests cheesesteaks.  She enjoys reading, watching bad tv, eating and cooking good food and digging in the dirt. Catch up with her continuing efforts to grow food in South Philly by clicking here.
Sarah's Garden Gardening and Farming
Tweet