Editor's note: Sarah submitted this on Thursday before the temperatures dropped through the floor and we got that great pre-Halloween snow. We hope her fall crops are doing better than ours! I kind of knew that when I said that last week's harvest was the last I'd be eating my words...look at these beautiful tomatoes! [caption id="" align="alignnone" width="500" caption="tomato rainbow"] 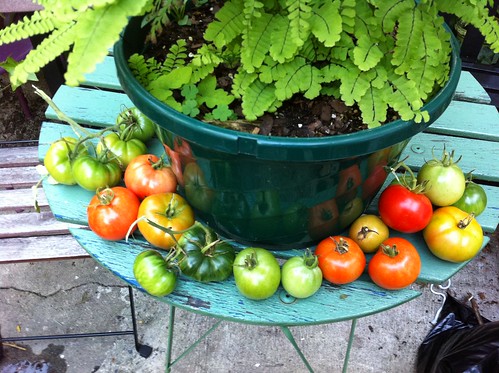 [/caption] The tomatoes are still going out there.  I'm loathe to trash tomato plants that still have lots of tomatoes on them but I also need to free up some sun space for my kale and chard, so I picked the tomatoes from the plants that only had one or two fruits on them and threw them out but left the ones with more fruit on them because I just couldn't get rid of all of them yet.  I love all the different colors of the tomatoes! [caption id="" align="alignnone" width="500" caption="pretties"] 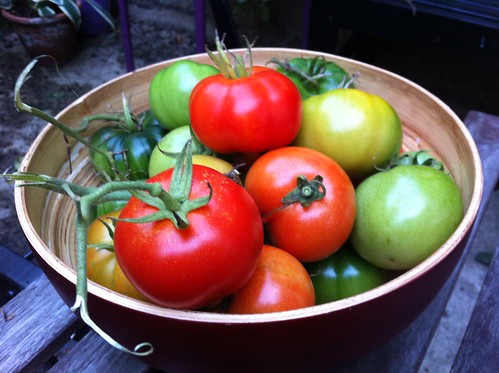 [/caption] But I think I cleared out enough space, so here's what my sunny corner looks like now: [caption id="" align="alignnone" width="500" caption="yellow fig, front and center"] 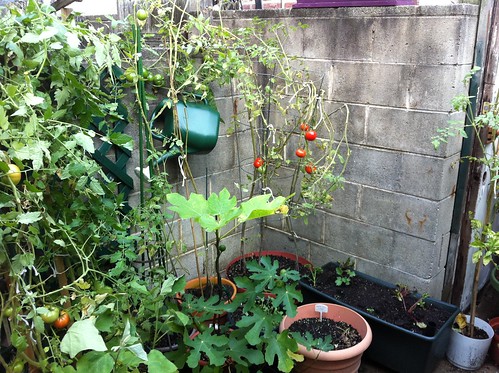 [/caption] On the left side of the photo you can see all the tomatoes still growing...those are the ones I just couldn't bear to part with.  I left the scraggly-looking plant in the center of the picture because it has lots of tomatoes on it (and they are not as red as they seem in this picture) - as soon as I pick those that one will be gone, too.   This picture also shows my two figs:  the taller one is still kind of yellow but the smaller one is doing great.  Lots of figs on it: [caption id="" align="alignnone" width="374" caption="Four figs!"] 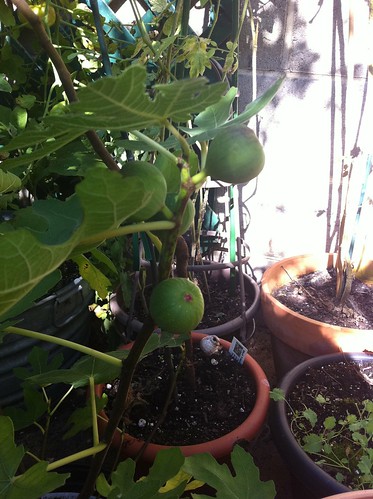 [/caption] I haven't decided yet if I'm going to put this fig (the non-yellow one) in the ground for winter or bring it inside.  We'll see! I also pulled out all the sunflowers along my back fence (I left them for the birds and little creatures to take the seeds and they took every single one!)  Man, I could have used a saw for that - these sunflower stems were tough!  I ended up either breaking them over my knee or holding them at an angle and stepping on them to break them - I wasn't strong enough to break them with just my arm strength.  When they finally broke they snapped with a very satisfying pop, though, and that was fun. I planted some things in the ground where the sunflowers had been (my raised bed):  a little rosemary plant I had inside and an heirloom strawberry plant.  I'm excited about the strawberry - it's from Bartram's Garden!  I heard that someone from Bartram's Garden would be at the Clark Park Farmer's Market (Thursdays 3-7 and Saturdays 10-2) with native plants from there to sell, so last Thursday I headed over after work.  I was hoping to get some raspberry plants and the ones they had were big and awesome but maybe not so great for carrying home on the trolley...but for $5 they had little strawberry plants and I've been wanting a strawberry for a long time so I grabbed one.  I still got weird looks for carrying a plant on the trolley but at least I wasn't in danger of scratching someone with a thorny raspberry plant (but it should be noted they had thornless black raspberries, too.  They were all just too big for me to carry on the trolley.)  Oh!  Here's little strawberry and rosemary in their new home: [caption id="" align="alignnone" width="500" caption="the ivy has gotten a little ridiculous"] 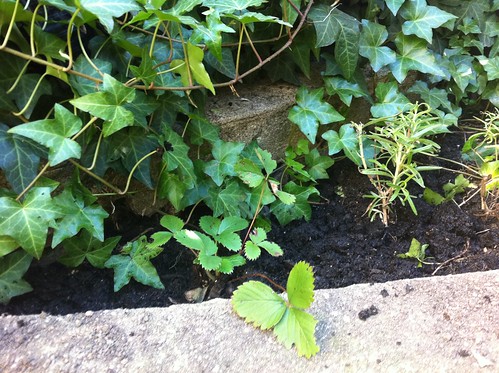 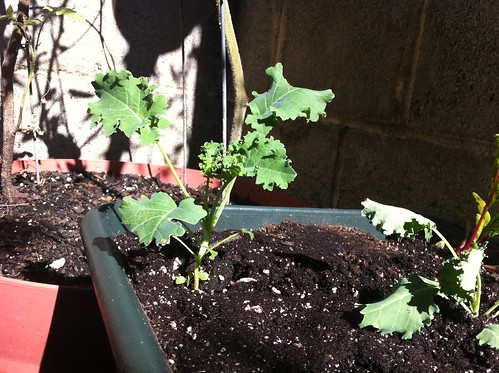 [/caption] My backyard definitely gets less sun now than it was getting in the summer but hopefully it's still enough.  I find it crazy that things are still growing...fall is such a nice season when it stays warm through October! Sarah DeGiorgis has lived in Philly for five years and is finally starting to feel like a true Philadelphian, though she still detests cheesesteaks.  She enjoys reading, watching bad tv, eating and cooking good food and digging in the dirt. Catch up with her continuing efforts to grow food in South Philly by clicking here.
Sarah's Garden Gardening and Farming
Tweet