Hello again!  I took off last week for a much-needed vacation.  Because sometimes you just need to see something like this: [caption id="" align="alignnone" width="500" caption="mmmm"]

[/caption] for a couple of days.  It was relaxing and lovely but I failed to mention to Dan that I did indeed have someone to water for me (thanks, roommate!) and she did a superb job so I came home to this: [caption id="" align="alignnone" width="500" caption="a veritable jungle"] 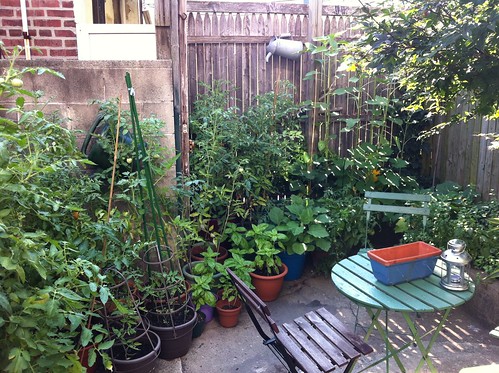 [/caption] but wouldn't it have been funny if I just let them all die?  Naw, I love my monkeys too much for that.  In fact, I bought them a brand new (ok, used actually) pot so some of the smaller eggplants can stretch their legs/roots a bit.  Buying a used pot at a thrift store is so much cheaper than buying one new and almost all thrift stores and flea markets have some even if they're kinda hidden under other things. But on to the garden!  It's hothothot out there but with everyday watering the plants seem to be doing just fine.  My sunflowers have grown quite tall (about 5' now!) so hopefully there will be flowers soon: [caption id="" align="alignnone" width="374" caption="go, sunflowers, go!"] 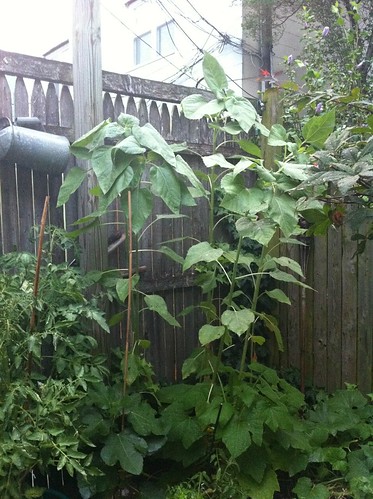 [/caption] And there are lots of tomatoes, including this nice yellowish one which has since turned orange: [caption id="" align="alignnone" width="374" caption="don't be fooled, it's another beefsteak"] 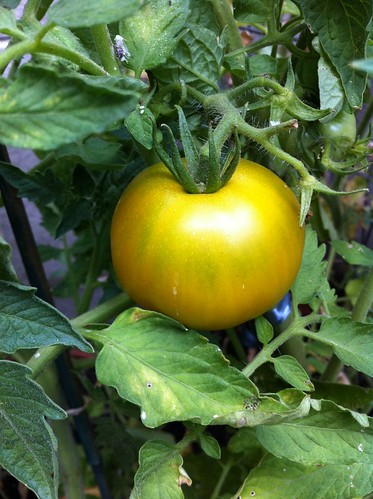 [/caption] and of course, lots of green tomatoes: [caption id="" align="alignnone" width="500" caption="I would ask you to see if you can spot all the tomatoes but I don't think I can. We can play spot the one red tomato though!"] 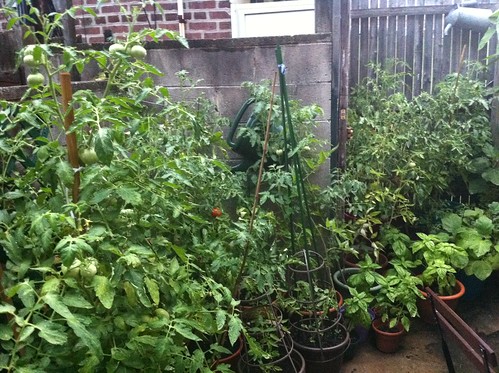 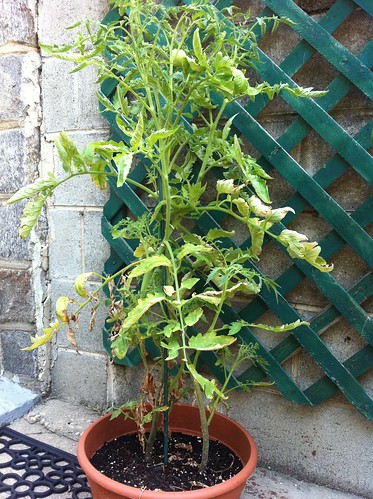 [/caption] The PHS women who came to judge my garden told me that this is blight.  Here's some more information about blight on tomato plants.  Since blight is fungal it's pretty common to get it on plants that are maybe a little too close together (cough cough my garden cough) so I'm not really surprised.  For now I've just snipped off all the leaves and branches that looked blighted and moved it away from the other plants to try to stop the spread of blight.  The tricky thing about blight is that since it is fungal you want to make sure not to compost any blighted plant parts because the fungus will continue to grow and contaminate the rest of your compost.  You also want to make sure you wash your hands thoroughly after touching blighted plants because it can be spread through touch, too.  Here is the plant in question sans blight (hopefully): [caption id="" align="alignnone" width="374" caption="blight-free?"] 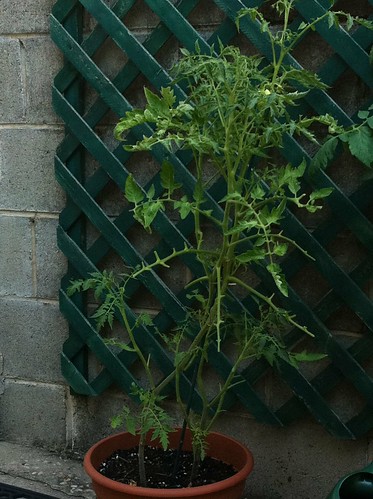 [/caption] I still have it apart from the rest of the tomatoes until it can learn to play well with others...or until it looks nice and healthy again.  This weekend (if it's not too hot) I plan on trying to give all the tomatoes a little more space and trimming more leaves that look a little blight-y (like the leaves around that yellow tomato above.) Lastly I wanted to tell you about something cool:  the South Philly Food Co-op is hosting its first annual Garden Tour and my lovely garden will be a stop on it!  Tickets cost $20 and will benefit the co-op.  It sounds pretty fun if you like peeking into people's private spaces (that sounded creepier than I planned, let's go with seeing what people do with their space) and it's self-guided, so you just get a map and can wander around without worrying about a big group.  I'll be at my garden all day and I'd love to meet some people who have maybe been reading this but have never seen my garden in person (all one or two of you?)  Anyway, all the details are here and I urge you all to come and hang out with me!  I'm fun, but I'm sure you've gathered that from all my posts, right? Sorry this is kind of short; I'm still catching up from my vacation and also have some sort of weird sickness that enables me to sleep through people loudly playing music in the next room...oh wait, I do that anyway.  But I'll leave you with the promise that I'll do some garden work this weekend and a picture of some tomatoes I took after the brief rain the other day.  Beauties! [caption id="" align="alignnone" width="374" caption="nice and clean"] 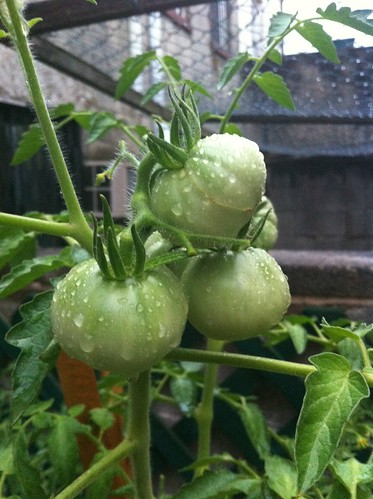